Bloodlands: Europe Between Hitler and Stalin 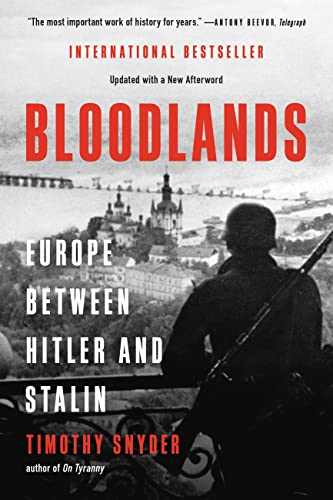 “Snyder’s book graphically, relentlessly details the horrific murders committed by the Nazi and Soviet regimes in the vast geographic region between Germany and Russia.”

In 2010, Yale professor Timothy Snyder’s Bloodlands appeared to rave reviews. Snyder has now updated it with a new afterword. And it could not be more timely as Russian and Ukrainian forces clash today in that same geographical region. Snyder’s book graphically, relentlessly details the horrific murders committed by the Nazi and Soviet regimes in the vast geographic region between Germany and Russia.

This is not a book primarily about war; it is a book about state murder. The Nazi and Soviet regimes committed mass murder before and during World War II. The motives for the murders were part ideological, part racial and ethnic cleansing, part geopolitical, and part sadistic. As the British historian Paul Johnson wrote about these times, “the Devils had taken over.”

Snyder starts, as he should, with Stalin, who came to power in the Soviet Union by cunning, bureaucratic skill, and an unsurpassed ruthlessness. After eliminating his chief political rivals in the Communist Party, Stalin turned his attention to swiftly industrializing the Soviet Union by the forced collectivization of agriculture, which affected all of Russia but was concentrated in Ukraine, which was the breadbasket of Europe.

The result of the forced collectivization was a massive state-induced famine that resulted in the starvation deaths of untold millions in Ukraine and elsewhere. This event, which took place in the early 1930s, has been the subject of excellent books by Robert Conquest (The Harvest of Sorrow) and more recently by Anne Applebaum (Red Famine), and the 1919 movie Mr. Jones (named after one of the few courageous journalists who wrote about the famine at the time and tried to expose the atrocity to the world).

In Ukraine, cannibalism was common, even widespread. Farmers’ food and livestock were seized by the state. Those “kulaks” who hoarded food were shot. Snyder notes that in Ukraine the number of orphans grew exponentially, and he notes that a child becoming an orphan meant that his parents refused to eat him. Not all parents were so sacrificial. Snyder’s chapter on the Soviet famine is nightmarish.

While Stalin was starving whole villages in the Bloodlands, Hitler was coming to power in Germany, determined to overturn the diktat of the Versailles Treaty, acquire more “living space” in the east, and to racially cleanse the lands Germany conquered. As Hitler moved geopolitically, Stalin instituted the Great Terror—a purge of Soviet political, military and security forces (complete with show trials and forced confessions) combined with the wholesale murders of anyone suspected of anti-Soviet activities, including national enemies.

Snyder estimates that between 1937 and 1938, at least 250,000 Soviet citizens were murdered “on ethnic grounds.” Those who weren’t shot were sent to the metastasizing Gulag Archipelago, where Stalin deported whole ethnic groups to serve the slave-labor economy. Many deportees died from hunger and bitter cold temperatures on the way to the Gulag camps. Others died from the severe work conditions inside the camps.

Hitler, too, though at first on a lesser scale, imprisoned and murdered political rivals, so-called “inferior races,” and Jews. Hitler blamed the Jews for Germany’s humiliation after the First World War and was determined to rid Germany of the Jewish race. At first, the Nazis looked to deport Jews to Russia and later Madagascar. Once the war began and more and more Jews fell into the clutches of the Nazis, the Final Solution was implemented in the death camps of the Bloodlands.

Snyder details how the Nazi-Soviet Pact of August 1939 sealed the fate of Poland and its people. The secret clauses of the agreement divided up Poland between Germany and the USSR, and allowed the Soviets to annex the Baltic States while Germany moved west to conquer France and the low countries.

Poland suffered the combined horrors of being occupied by Nazis and communists. The Nazis rounded-up Polish political and intellectual leaders and Jews, while the Soviets systematically murdered the Polish officer corps, including more than 20,000 at Katyn Forest, and the Kalinin and Kharkiv prisons. Snyder calls these years the “second period” of the Bloodlands during which both regimes committed mass murders on an almost equal scale.

Snyder writes that June 22, 1941, marks the third period of the Bloodlands from 1941 to 1945. “It was the beginning,” he writes, “of a calamity that defies description.” And in this period, Snyder writes, “the Germans were responsible for almost all of the political murder.” Snyder estimates that the Germans murdered more than 10 million people during these five years, including nearly six million Jews and more than three million war prisoners. Here, Snyder may be understating the extent of Soviet political murder during these years. The camps of the Gulag remained filled, and some writers, including Nikolai Tolstoy in Stalin’s Secret War, accuse Stalin of killing up to half of the official 20 million Russian war deaths.

Some who suffered from Soviet atrocities initially greeted the conquering German armies as liberators. This was especially so in Ukraine. Germans appealed to Ukrainian nationalism and blamed the “Jewish” communists for Ukraine’s tragedy. Some Ukrainians, and other citizens of the Bloodlands, became willing accomplices in the Nazi Final Solution of the “Jewish problem.”

The Jews who had not fled the Bloodlands became victims of Himmler’s SS and were either shot or sent to the death camps. The Bloodlands in essence became a slaughterhouse. In Poland, Ukraine, and Belarus, there was mass terror that accompanied mass murder. Snyder divides the Holocaust geographically: “About 5.4 million Jews died under German occupation. Nearly half of them were murdered east of the Molotov-Ribbentrop line [in central Poland], usually by bullets, sometimes by gas. The rest perished west of the Molotov-Ribbentrop line, usually by gas, sometimes by bullets.”

Snyder describes what he calls the “death factories” at Chelmno, Sobibor, Treblinka, Belzec, Majdanek, and Auschwitz. These are familiar horror stories, but their retelling is necessary to understand the Bloodlands and to be wary of those who envision grand schemes for human progress.

As the fortunes of war shifted in the Soviets’ favor, the Nazi killing machines continued to claim more victims. Snyder sees the Warsaw Uprising in the summer of 1944 as manifesting both Nazi terror and Soviet cold-bloodedness. And he notes that Stalin’s “cynical treatment” of the brave Polish Home Army in the face of repeated Anglo-American requests for the Soviets to provide help to the Poles “was the beginning of the confrontation that was to come when the Second World War was over.” He quotes Vasily Grossman: “The ashes of Warsaw were still warm when the Cold War began.”

As the Soviets entered German lands, Red Army troops began a rampage of rape and murder reminiscent of Japanese soldiers in Nanjing in the late 1930s. As the war wound down, Poles turned against Ukrainians, Baltic peoples were deported, ethnic cleansing occurred on a vast scale, and the Gulag remained filled. And Stalin proceeded to impose friendly communist regimes on the “liberated” nations of central and eastern Europe.

To understand what happened in the Bloodlands, Snyder writes, it is worth reading Vasily Grossman’s comparisons of the Nazi and Soviet regimes in Life and Fate and Everything Flows. The “key” to both regimes “was their ability to deprive human beings of their right to be regarded as human.” Snyder explains that in both regimes “utopias were advanced, compromised by reality, and then implemented as mass murder.”

In the Bloodlands before and during the Second World War, at least 14 million people were murdered by the Nazis and Soviets. But there was another Bloodlands in Asia that Snyder mentions only in passing. That Bloodlands also witnessed mass murder on a scale rivaling or surpassing the Nazi-Soviet killings.

The Japanese imperial state murdered prisoners of war and systematically brutalized Chinese and other Asian people that fell under their control in the 1930s and 1940s. After the war, the Chinese Communist Party engaged in terror campaigns against its own people, including a state-induced famine during the Great Leap Forward that killed even more people than Stalin and Hitler. Mao’s Great Cultural Revolution in the 1960s and 1970s was comparable in scale and equally as murderous as Stalin’s Great Terror. And today, China has been accused of committing genocide against the Uighurs. The Asian Bloodlands awaits its historian.