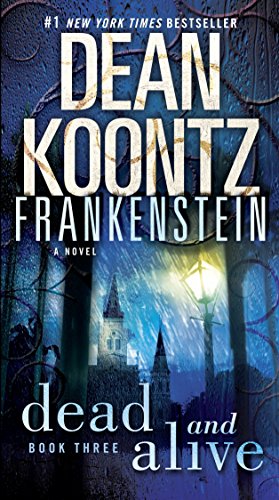 Bantam Books, July 2009 Reviewing the last book in a series is often times a fruitless enterprise. Then again, if you may have passed over this trilogy, allow me to point out the error of your ways with this brief encapsulation of what occurred in the first two books: Frankenstein: Prodigal Son and Frankenstein: City of Night. Both Victor Frankenstein and the man he created from spare parts survived throughout the ages.  The mad doctor, after centuries of working with other egomaniacs like Hitler and his kind, ends up in New Orleans as Victor Helios, a wealthy man with a reputation as a philanthropist. What no one is aware of is the fact that Helios has perfected the scientific process of cloning and is busy making what he calls the New Race.  Built in cloning vats, they are faster, stronger and more durable than mere humans, the Old Race. Helios’ plan is the complete and utter annihilation of the Old Race, replacing it with his artificial people. The only things standing in his way are two street savvy detectives, Michael Madison and his partner/lover, Carson O’Connor and Helios’ original creation, still alive and calling himself Deucaulion.  Over the centuries, Deucaulion has become a philosopher and realizes the true horror that is Victor Frankenstein. He has vowed to stop his creator and end his mad dream once and for all. In the first two books, Decaulion and the two detectives began to unravel Helios’ master plan and learned that many of the city’s officials and law enforcement chiefs had been murdered and replaced by Helios’ cloned replicants.  In this the third and final chapter, Decaulion sets out to infiltrate Helios’ clone factory and his ultra secret laboratories to destroy them.  But to do so, he and his allies will have to face unimaginable horrors.  At stake is the very survival of mankind.   Spinning the old Mary Shelley classic on its head, Koontz has a grand time making the “monster” his noble hero and the scientist the immoral, heartless villain.  He does this with amazing skill as it is one of the hallmarks of his fiction: inventing heartless, sadistic sociopaths who are worst than any monstrosity Hollywood could ever invent.  Koontz understands that in a world of sinners and saints, we don’t need special effects to make monsters.  Too many of them walk among us every day. Frankenstein: Dead and Alive may be an outlandish pulp nightmare, but its good versus evil theme is all too believable and scary as hell. Ron Fortier is an author and a frequent reviewer of pulp fiction. He is currently working on a new comic series, Mr. Jigsaw, Man of a Thousand Parts from Rob Davis’ Redbud Studio.