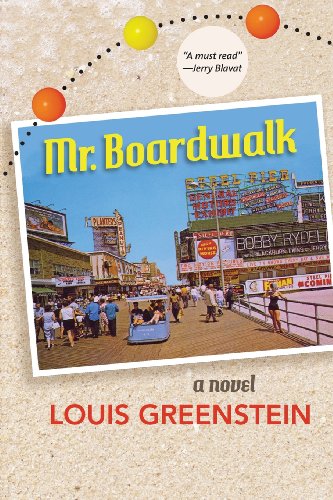 “Greenstein weaves a story of past and present in a way that creates a sense of timelessness.”

As news of a series of casino closings rock Atlantic City, yet another economic collapse of the historic and famous beach town seems imminent.  Established in the mid-1800s, Atlantic City has consistently mirrored the socioeconomic and cultural shifts of the country. This current meltdown marks the end of an era only just beginning in Louis Greenstein’s novel Mr. Boardwalk.

Greenstein’s Atlantic City was the beach town of the 1960s and 70s, when the famous boardwalk was populated by small businesses, arcades, rundown amusement piers, fortune tellers, bearded ladies, grotesques, and gypsy grifters. This was the Atlantic City of simpler excitements salted with the grit of carnivale.

Talk of legalized gambling was only a whisper on the wind at first, but the reader knows before Greenstein’s characters do exactly what monstrous changes will be coming to the culture of this seaside resort. The Atlantic City of Greenstein’s novel had seen better days, but it still offered a sense of family, of belonging to those who ran the businesses along the boardwalk.

Mr. Boardwalk opens in present day, with the adult Jason Benson visiting the Atlantic City Boardwalk with his nearly estranged wife and daughter. A man who has long harbored secrets about his own past, he begins to speak to them about his youth there on the boardwalk, stories he has never shared before.

The Atlantic City that surrounds them is the one that swallowed the beach town of his youth, and signs of new decay are all around them. This Atlantic City is the one we know now: billion-dollar casinos, high-stakes gambling, high-risk action, and high rollers rubbing elbows with the down-and-out, the homeless, the desperate.

With jobs disappearing as casinos declare bankruptcy, Atlantic City in 2014 teeters on the brink of a plunge into darkness. But the Atlantic City Jason shares with his wife and daughter is the Atlantic City of his youth, when he lived and worked at the beach in his father’s soft pretzel store, where his family had close, trusting relationships with the owners of other stores, arcades, restaurants. Yes, it was a little seedy. Yes, it was down-at-the-heels. But everything existed on a human scale, and lives were interwoven in ways that created deep and lasting bonds.

As the narrative unfolds, we see through Jason’s youthful experiences the seasonal magic of a town that sprang to life each Memorial Day and slowly went to sleep after Labor Day.

There was a kind of magic that followed the cycle of the seasons which infused and energized the life of those who lived in harmony with that cycle. The gypsy families who did business in New Jersey through the summer would disappear to areas further south, to see the Gypsy King, each winter. Can you get any more mysterious and mythical than that?

The crowded beaches would empty of people, leaving wide expanses of sand and sea punctuated with the cry of gulls over the chilled waves, white-capped and warning of the coming winter. Stores would board up for the coming hard seasons of snow and ice. The rides on the piers would shut down. In that cycle, and in the lives dependent upon it, there is a kind of magic born of nature’s mysteries. In that ebb and flow, disappearance and return, we feel the wisdom of the earth itself.

This all goes unspoken, but is deeply felt, within Jason’s stories. His childhood unfolds as those youthful summers do, with life in suburban Philadelphia during the winter feeling pale, lonely, sad and a little desperate by comparison. The sorrows of Jason’s life happen in those winter seasons. His father, never a happy man, becomes angrier and more explosive when summers end. Family complications and sorrows always seem to take place during the cold times.

Also in the ebb and flow of Jason’s narrative is the tidal shift of the 1960s.  The teenage girls stop wearing bras, the teenage boys grow their hair long. Rock and roll music changes dramatically. The smell of pot drifts through the summer air. Social and political unrest, civil rights struggles, Vietnam protests, all become a subtle blend of the colors of the times.

Jason is coming of age in one of the most tumultuous times in our country’s recent history, and what he learns of life is a combination of the sorrows of wintertime and the Dionysian risks of a 1960s Summerland.

Yet it all functions as backdrop to the central story Greenstein tells of a young man’s obsession with the freedom, the magic, the wonder and the dreamscape of an ocean town on the brink of losing its seedy, magical innocence to a corporatized vision of high-risk and high-profit recreation.

The ebb and flow of the season’s cycles, the reader knows, will be replaced with the 24-hour no-time, no-season world of high-stakes gambling in casinos where lights are calibrated to simulate a kind of timeless, endless day. More than Jason himself, we know what looms on the horizon for this town, and for the people. Human scale will be replaced by gigantic casino structures. Human lives will count for little. Reflective of the rest of the country, people in Atlantic City become more and more disposable.

The one thing that connects both sides of Jason’s youthful life is a skill he learns during one summer on the boardwalk: juggling. He juggles for money during the summers and juggles for money during the winters in downtown Philadelphia. The juggling is symbolic of the ways in which Jason keeps his worlds spinning, the ways in which he learns to keep it all moving, moving, moving. But somewhere along the line he loses his ability to keep it all going, and as life feels like it’s falling down around him, Jason realizes that it is time to finally take stock.

The stories of Jason’s personal losses continue to unfold as his wife and daughter listen, slowly coming to understand just how much this man has concealed of himself over the years. As he comes to terms with the losses for which he has yet to mourn, his family comes to terms with the husband and father they only partially knew.

There is a reconciliation that feels like nothing short of a soul retrieval as Jason the man, in this physical return to Atlantic City, reclaims Jason the boy, whose spirit and dreams had been abandoned here decades ago. As the man and the boy are reconciled, so is the family restored to greater unity.

In Mr. Boardwalk, an older, more magical Atlantic City manages to shine through, first in the glimmering shadows and then more boldly, taking shape and standing fully realized through the memories and devotion of a young boy’s love. Greenstein weaves a story of past and present in a way that creates a sense of timelessness.