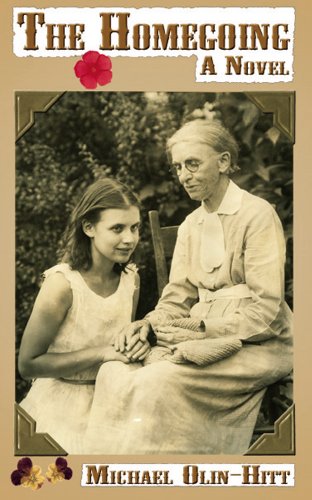 “In The Homegoing we enter this world as outsiders, but through Michael Olin-Hitt’s tender revelations we experience a sense of coming home.”

“The grace of God may be free, but it ain’t cheap. Ain’t nobody gonna cheapen it.”

Michael Olin-Hitt’s novel The Homegoing takes us back to lost times in rural Appalachian America through layered telling of the Marshal family’s central tragedy: the drowning death of young Hannah Marshal in Laurel Creek, in 1937.

The mystery of her disappearance and death are not solved until 1960, when her niece, Ruth Sherman, travels down the many darkened lanes of secrecy in order to retrieve and reconnect the shards of truth protected by members of the family and community.

Even in 1960, Appalachia is one of communities woven together with the bonds of family, of generational inter-connections and loyalties. It is a world where secrets are held as holy trusts, as questions of personal honor and loving devotion.

In the village of Laurelville at the foothills of the Appalachian Mountains, those bonds are deep and strong, held doubly strong by the power of religion. The Holy Lamb Pentecostal Church plays a central role in the community’s history; it is a place of sanctuary, but also a place of powerful spirit where people speak in tongues and are inflamed with the power of the Holy Ghost.

The belief in spiritual healing is strong, and the most powerful faith healer in Laurelville is the mother of the drowned girl, Ruth’s grandmother, Dartha Marshal. She is called upon to minister to the sick, and also to prepare the bodies of the dead for the traditional Homegoing mourning practices.

Dartha is a holy woman in ways that transcend church-centered Christian practices. Hers is a spirituality with deep ties to the cycles of life, to the Earth, to nature—but it is clothed, perhaps even bound, in the raiments of Christianized religious language and thought.

That this spirituality transcends the more sanitized church teachings is seen in the kind of holy sexuality that pours through those aflame with the spirit. There is an understanding of the holiness of ecstasy even in its most physical forms, still understood in the Tantric practices of Hinduism and Buddhism, but certainly not to be found in the body-loathing of fundamental Christianity.

There is something mighty interesting about Michael Olin-Hitt’s understanding of the workings of the Appalachian Holy Spirit.

Of himself, Mr. Olin-Hitt says, “The one thing that unites all of my writing is a deep interest in spiritual gifts and the many ways in which they manifest in people’s lives. My novel and both books of nonfiction are explorations of the mysteries of our spiritual inheritance as human beings. Spiritual experiences are very personal and difficult to explain. . . . I enjoy using my background in writing to bear witness to the mysteries of faith in the midst of life’s great challenges.”

This is certainly true in The Homegoing, in which the young female protagonist, Ruth, is struggling against rural tradition and her embarrassment about her background when she travels to the city to attend Ohio State University.

The faith-healing activities of her grandmother and of her deceased Aunt Hannah cling to her because of her own calling in spirit. She wants to shed it all, to live in a city, to work in a bank; she doesn’t want to be traveling in a pickup truck with her overbearing, scripture-quoting grandmother on the way to faith healings or church services.

She practices hard to change her patterns of rural speech; she obfuscates where she is from when college friends ask. But during the summer between junior and senior year, she risks returning home, and within 24 hours she is drawn back into the faith healing and evangelism:

She is resentful of the power her family and her own personal history have to keep pulling her into a life she doesn’t want to live. She’s thrown back into a relationship with a childhood sweetheart, Tommy Webb, shed when she left for college, and is resentful even of the easy familiarity she feels when she’s beside him. He doesn’t seem to understand her frustration, which frustrates her even more.

“I mean I just got home yesterday, and I’m already neck deep in the mess of our families,” I glanced up at Tommy, then focused on a rock in the road, the red, course, surface of sandstone. “I mean, first my grandma practically kidnaps me for prayer, then Charlene takes me on some wild night ride with booze and boys. You show up,” I stopped myself, not wanting him to know what bells and whistles he’d set off in me. “Your grandpa is about dead from a snake bite, his flesh open like the belly of a gutted fish. Now, I’ve driving with my old boyfriend to destroy a bootleg still. That’s what I mean.”

Ruth is uneasy with the familiarity of home, and of the lives she had worked hard to define herself against: an aunt whose front lawn is decorated with figures of Jesus and six of the seven dwarves, the rut-paths of old logging roads she could follow with her eyes closed, barns and stills and evangelical prophecy. She’s embarrassed by the backward-ness of it all, and longs for the normalcy of an office job, life in a town of “regular” people.

Morever, it is not only the backwardness and the overpowering spiritual world that Ruth is trying to escape, it is a constant comparison she endures with her Aunt Hannah, a woman who died 18 months before her own birth.

It is the lifelong experience of being seen as Hannah’s replacement rather than being seen for herself. Now at age 21 she is determined to break free of this woman’s shadow, a determination not to be sucked into the vortex of grief that still holds her family. The only way to break free of it all is to uncover the secret of her aunt’s death. This, too, is a kind of calling.

“It was as if Hannah wanted to be found, as if she’d been waiting all these years for me, and now that I had turned her way, she was ready to show me everything, and somehow I knew it was more than I’d ever expected or wanted to know.”

It is through Ruth’s journey into the story of Hannah that she can finally free not only herself but also her family from the weight of Hannah’s death. The threads of her story tie together her own secret, a congregation of snake-handlers, a Shawnee family’s history, as well as the secrets of Hannah’s mother, Grandma Dartha, and her sister Chloe. It even includes a secret about Chloe’s husband’s family. Ruth willingly calls down upon herself the storm of stories they have all been too frightened to hear.

The Homegoing is about place, family, and community, mothers and daughters, about holy sexuality and the Christian sense of sin, about secrecy and truth and healing, both holy and human. It’s about the many ways we die and are born again.

The author writes about all this with a genuine love and compassion. In The Homegoing we enter this world as outsiders, but through Michael Olin-Hitt’s tender revelations we experience a sense of coming home.