Romanov Riches: Russian Writers and Artists Under the Tsars 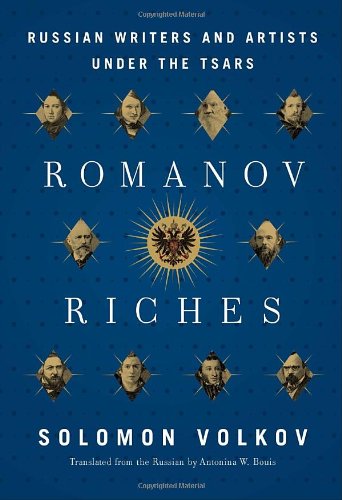 To those used to the utter lack of respect given to artists in contemporary times, especially in America, the topic of Mr. Volkov’s book may seem puzzling. But as difficult as it might be to believe, artists and poets were taken very seriously at other points in history. Romanov Riches offers up a close and personal view of the intense relationships that existed during the Romanov Dynasty, from its beginnings in 1612 to its overthrow in 1917, between the rulers of Russia and the country’s poets and artists.

This dynasty ruled for over 300 hundred years, during a tumultuous time in world history. As an enormous empire, it covered over a sixth of the globe; the cultural achievements of its artists were known and admired throughout Europe.

This book is the first to examine the relationship between those artists and the Romanov rulers, and to dispute the caricature of the Tsars as indifferent to the arts. Mr. Volkov writes, “Yes, the Romanov men were first and foremost military by profession, which is understandable, but as most of them were people of excellent education, they took a lively interest in literature, architecture, music, painting and theater; and some of them (especially Peter the Great, Catherine the Great, and Nicholas II took a hands-on approach to culture building.”

Again, there might be confusion in the mind of the average contemporary reader, since an “excellent education” that includes an enormous amount of exposure to the arts has become the stuff of legend or myth. A ruler who is actively engaged in culture-building presents a fascinating alternative reality to what we see in our times, when most political leaders are actively slashing arts budgets and trashing the value of art-making. If for no other reason, this book is a fascinating read. Catherine the Great, for instance, was actively involved in establishing the publishing industry in Russia. Nicholas I publicly called Pushkin, “the wisest man in Russia” and involved himself deeply in Pushkin’s creative work. Turgenev’s works are credited for influencing Alexander II’s freeing of the Russian serfs. Alexander III loved the work of Tchaikovsky and passionately followed the novels of Dostoevsky.

Art and literature were understood to be important tools of communication and commentary in Russia. When a poet wrote about a moment in history, or about a particular ruler, great attention was paid. The writings always came to the attention of the various tsars, whose reactions ran the gamut from appreciation and patronage to rage and banishment. Sometimes the same poets experienced patronage at certain points of their career only to be banished to Siberia at other times.

So, of course, the experience for the artist himself (and yes, these were largely male artists receiving all this attention), was fraught with complexity and danger. Those under the patronage of a member of the royal family, especially the Tsar or Tsarina, were seen to serve two masters: their art and their ruler.

That is a situation fraught with peril. There were poets who were taken into the palaces, given suites of rooms, hired to create, to inform, even to tutor the royal children. Their influence was extensive; their dependency on the favor of the court, however, was great. The dark side of this relationship was seen in the punishment leveled on those artists, if their muse led them to create something that angered the power sitting on the throne.

The personalities that move across these pages give great energy and life to the book. The Romanovs, of course, were a fascinating group of individuals; but the figures of Gogol, Pushkin, Dostoevsky, and Tolstoy are also here in three dimensions.

Even more remarkable is the presentation of the many ways in which the Romanovs realized the extreme importance of culture as a political instrument. Mr. Volkov writes that history “. . . has confirmed the connection between control of the cultural process and stability; the more involvement by a Russian ruler with the culture, the stronger the regime.”

In our time, the weave between the arts and leadership has come unraveled. Read this book, if only to see what life was like at a time before the fraying of our cultural and artistic fabric.