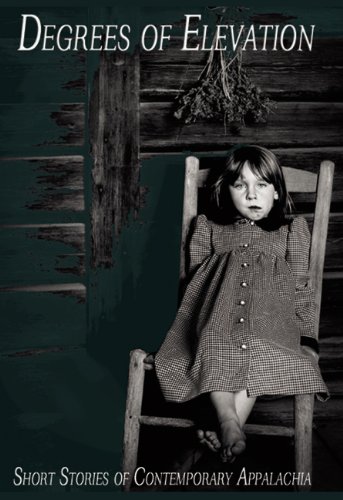 Degrees of Elevation: Short Stories of Contemporary Appalachia brings together 17 gifted writers whose voices are as unique and striking as the region about which they write.

Editors Charles Dodd White and Page Seay have gathered some of the finest storytellers of this region, some writers, in White’s words, “not yet established” and others whose names will be recognized. Ron Rash, for instance, was recently awarded the Frank O’Connor International Short Story Award for his own collection of short stories. But whether these writers are still emerging, or whether they have managed to move beyond regional recognition, each casts an unflinching eye toward a region of America that exists in the mists for most of us, offering us glimpses of its raw reality. The lives and choices written about in this collection are hard-edged; there is no romanticizing.

In “Horseweed,” Chris Offutt introduces us to William, a construction day worker struggling to make ends meet, hoping to one day have enough money to put an indoor bathroom in his home. Growing hemp on mining company land, he tends his crop in the late hours of the night. Confronted by the possibility of arrest in the person of a mining company guard, William realizes that the man has been bitten by a snake and will die without his help. He must choose whether to let this dangerous stranger die—thereby avoiding problems with the law—or to save the man’s life and risk his own ruin.

“Magic,” by Jim Nichols, brings in Joe, a man who does magic tricks. He lives in a trailer park and drives an airport taxi to earn some money. Being arrested after a typical night of bar-fighting has never phased him before; but he’s brought to a kind of paralyzing depression when he is made the show-and-tell prisoner for a group of school children visiting the jail.

Hunter Tillman is a gay meth-head journalist who falls in with a group of meth-head castrators. Walt Thomas returns home from the war with a self-inflicted blindness that helps him, somehow, to finally see. Ligon Fields, a self-appointed, unordained minister, somehow manages to cast out devils—or at the very least, drive back home missing cats. LaWanda Heever, a big-haired woman with big dreams, realizes she’s wasting her days selling fishing bait to the walking dead, and so heads her truck out of town in search of a real life. What all these stories share is that the life they portray is hard. In “The Coal Thief,” Alex Taylor writes, “Coal buckets went empty and houses turned cold for boys just as they did for men and old women. There weren’t any favors.”

Degrees of Elevation provides a variety of characters portrayed in their deepest and most exposed moments. You aren’t likely to forget their stories.

White and Seay have done us all a favor by gathering these remarkable stories together. White writes, “We do not believe any one view of Appalachia is a Truth entire. But somewhere in the patchwork, we have tried to present the hard beauty of the land and the history of a unique country and its people.”

They have succeeded. Degrees of Elevation is a wonderful collection that deserves to be read, savored, and remembered.