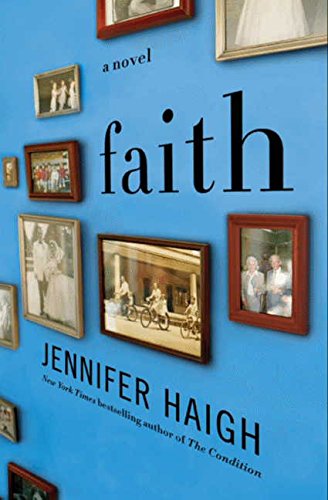 Faith is a story about the many ways we can create belief systems and trust structures, and the even greater number of ways that those systems and structures can be threatened and destroyed.

Father Art Breen, a Catholic priest who has devoted his life to the Church and its followers, finds himself embroiled in the Boston area Catholic Church pedophile scandals when he is accused of molesting a young boy.

The response of the Catholic hierarchy is to strip him of his position and parish duties, and hide him away in a small rented apartment. The stunned priest finds himself pushed into the shadows, while the Diocese struggles to find the most expedient way to quell the furor over the broader scandal and public outcry. There is no interest on the part of the power structure of the Church to investigate the allegations, or allow Art to defend himself. The betrayal Art feels when the Church responds in this way is nothing in comparison to what he feels as the parishioners, the community, and even members of his family turn against him without proof.

The characters of this drama include Mary, Art’s mother, who never falters in her belief in her first-born son. Abandoned by her husband shortly after Art’s birth, Mary struggled as a single mother in the 1950s to raise her boy alone. Life was hard and only got slightly easier when Mary remarried Ted McGann. While he provided some financial security, he also brought the insecurities of alcoholism into the home.

Their family grew with the birth of two more children. Never feeling completely absorbed into the new family, Art chose to enter St. John’s, a Minor Seminary, or pre-seminary, for young boys who wanted to prepare for the seminary and priesthood. The only character whose unwavering belief in Art requires no need for proof, Mary has faith in her son, and is astonished and horrified that her other children need anything more concrete.

Faith, ultimately, asks whether there IS anything more concrete than faith.

Sheila, Art’s half-sister considers herself close to Art, yet has moments of doubt about her brother’s innocence. Nonetheless, she leaves her home in Philadelphia, where she works as a schoolteacher, in order to return to Boston and uncover the real story behind these allegations. It is her voice that narrates the book, and the character brings us along on her own journey of family discovery. As with many families, there are secrets and denials, and in her search for the truth of her brother’s story, Sheila uncovers many other long-concealed facts about her family.

Mike, Art’s half-brother, is horrified and ferociously angry at what his brother is accused of doing—believing it too easily, and realizing too late how unjust he was. A successful real estate investor, Mike has built a life and a reputation in the community in a very different way than Art; but that life is placed in jeopardy by this scandal, and the long shadow it casts on his own family.

In mounting his own investigation of his brother’s accusers, Mike is drawn into some very risky behavior. What happens reveals more about his own unhappiness in marriage than his brother’s guilt or innocence. He experiences his own moment of personal crisis, but is ultimately led to a realization about his brother and the accusations levied against him.

As for Art’s stepfather, Ted, there is little awareness of the situation, since he has a sort of dementia brought on by decades of alcoholism. Yet, it is Ted who delivers a pivotal message which reveals yet another level of secrets, one which casts light on Art’s childhood and the reasons why he is unwilling to mount an appropriate self-defense.

The woman who causes all this suffering is a meth-addicted single mother, Kath, the daughter of the parish housekeeper, and her young son, Adain, both of whom Father Art had taken under his wing. The book looks at these characters as Art did, with compassion and sorrow for their misery. Not once in the course of his own suffering does Father Art attack this woman, despite the many ways he could have discredited her story.

Faith is a novel that investigates the nature of truth. It reveals the many ways in which we are made “guilty”—either by unjust public condemnation or our own personal and private judgments against ourselves.

The book also looks closely at the unraveling of the Catholic Church that has occurred in recent decades, with special attention given to the most recent scandals that rocked the trust of the Catholic community at large. When the institution fails, what is left of the religion, of the spiritual life? Faith also looks at the family as an institution, and asks the same questions: How does the institution of family survive? What is the glue that holds it together?

In both cases, Ms. Haigh offers the suggestion that it is faith, more than truth, more than innocence, perhaps even more than love, which keeps things from flying apart.