Tracks: A Novel in Stories 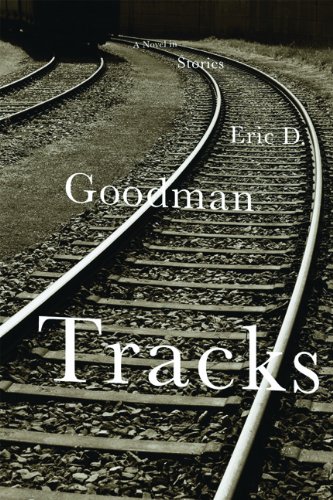 “. . . the kind of book that you can read best at a leisurely pace, enjoying the slower rhythms of this literary ‘people watching.’”

“The train has a way of transforming a person. Sometimes passengers become aware of things they didn’t know before boarding. Something about the stillness on a moving train, being around people and alone at the same time. They’re neither here nor there—in transition. That frees them up to do things or say things they might not ordinarily do or say.”

Set on a trip from Baltimore to Chicago, Tracks is a novel-in-stories, with the story of each passenger standing alone as well as working as part of a greater whole. There is an accretion that amounts to more than the sum of each individual story as you move through the book.

Tracks opens with Prewitt, an aging businessman, riding the train to Chicago on yet another business trip. He feels his age and the ways in which the world is changing. The way these younger people shove and elbow their way onto the train disheartens him, and seems symbolic of a greater social disease. “When Prewritt was young, people didn’t act this way. People had respect for one another instead of contempt.”

Longing for that kind of gentility, Prewitt realizes that it can no longer be found in the professional world. The new generation of management disheartens him. They “emanated a smug pride that said I know more than you, I have more than you, and I’m a better person for it.”

In a moment of inspiration and abandon, he throws his daily planner out the train window, determining in an instant that he is going to retire, now, this day, and spend the remainder of his years happily with his wife. So as not to reveal too much, let’s just say that it doesn’t quite work out that way.

The stories move through the train, and we enter the life of a public speaker, who earns a living by lecturing about the need to legalize the vices that have made him wealthy—drug running, gambling, prostitution. A young woman rides the train, on her way to Chicago and a new life, having left an overbearing egocentric man behind. A soldier on his way to visit his parents before leaving for Iraq. A mob hit man stalks another passenger. A Holocaust survivor keeps a promise to her husband to visit the museum in DC and face her own past.

Mr. Goodman is a born storyteller who weaves his tales of each individual character, and then ties them together to create a finely patterned cloth. Like the Three Colors Trilogy (Blue/ White/Red) of director Krzysztof Kieslowski, Tracks develops in a way that has the secondary characters of one story become the central characters of another. As you move through the stories, you have the more transcendent experience of seeing each of the characters from many perspectives, at times understanding not only their “now” but something of their past and future.

Author Goodman says, “For as long as I can remember, I’ve been intrigued by the idea of multiple perspectives. I’d watch a movie or read a book and imagine how it would be different if told from the other guy’s point of view—or the point of view of a minor character. I’m also interested by the idea that every person, no matter how seemingly insignificant, has a story to tell.”

While the book was not actually written while Goodman rode a train, he did take the Baltimore to Chicago Cardinal Line during the writing, as research, making sure he was accurate about his details. A sense of place was also important to his approach. He states, “I wanted the scenes to be set in real places that people would recognize in Baltimore, Chicago, and on the train. Because the departure point of the train and book are Baltimore, most of the characters are from there, so Tracks is very much a Baltimore book. It can be seen as regional fiction.”

Many of the reviews written of this book point out that it’s a great summer read. This is true. It’s the kind of book that you can read best at a leisurely pace, enjoying the slower rhythms of this literary “people watching.” You may even find yourself encouraged to do your own daydreaming, there on the beach, as you imagine the personal lives of the people around you.