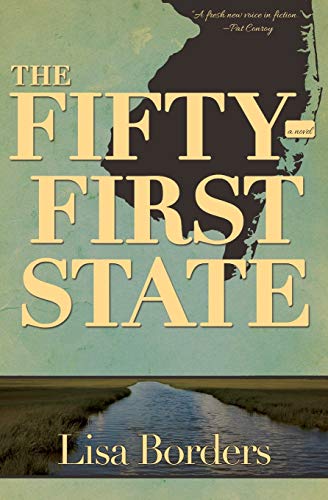 “Ultimately, bravery, love and hope are celebrated in The Fifty-First State, a state that is imagined, a state in which a better life is possible.”

Lisa Borders, in her second novel, The Fifty-First State, explores issues of tragedy and loss through the lives of two estranged siblings.

After spending years in an attempt to remake herself, older sibling Hallie Corson, a semi-successful NYC photographer, finds herself pulled back into the life she escaped by a sudden family tragedy.

A horrific multicar pileup on Route 42 in South Jersey has killed her father and stepmother, leaving Hallie’s stepbrother Josh alone and in need of care. Hallie is the only family the boy has; and despite having been estranged from her father and his second family for years, she feels deeply responsible for the boy. This sense of responsibility is increased because of memories of death of her own mother when she was a young girl; she knows all too well the pain of being a child losing a beloved parent.

Josh Corson, still in high school and struggling with his grief and shock, faces the calamity with silent endurance. The age-appropriate identity crisis of a high school senior is made enormous as Josh not only wrestles with his choices for a future, but also struggles to make sense of the senseless loss that has orphaned him.

The novel juxtaposes the life Hallie leaves behind in New York—with its fast pace, parties, creative energies, and ambitions—with the dismal agrarian wasteland of Hallie’s hometown. South Jersey is only one example of the many places in America that have been hollowed out by the collapse of the economy and by agri-business’s intentional ruin of small family farms. The fictional town of Oyster Shell is populated by a community of people trying, with varying degrees of failure, to hold on to what’s left of their lives.

There is Nancy Ackerman, struggling to maintain her failing horse farm, just as Donald and Brenda Corson had been struggling to keep their tomato farm from going belly up. They were members of a generation, perhaps the last generation in the country, who experienced the “American Dream” of hard work leading to some modicum of financial security; but in the later years of their lives, the continual meltdown of the country’s economy had torn that dream to shreds.

The younger generation of Oyster Shell never experienced the hope and reward their parents may have known. If there is any landscape in which to illustrate the hollowed out reality of America, it is in South Jersey, where miles of road pass abandoned farms, rusted tractors still sitting in empty fields, vacant silos holding nothing, standing as monolithic reminders of failed hopes.

This was the life Hallie had fled and was now forced to confront. It’s the only life her brother knows; and she feels forced to put her Manhattan life on hold for his sake. Those who are her age, who have remained in Oyster Shell, offer confirmation of Hallie’s distaste for the place.

There is creepy Cal Stutts, a violent, small-time criminal facing his limited options with anger and menace—whom Donald employed at the farm out of a sense of pity. There is Ram, doing scientific research on the deformed frogs of local Mollusk Creek, where toxic dumping created disturbing bodily abnormalities—symbolic of the emotional and psychological abnormalities being caused to the humans of the area.

The title of the book comes from the desire of many Southern New Jersey residents to be free of the overbearing industrialism of North Jersey, to become the fifty-first state. But it is just another impossible dream. The reality is that the agrarian life had already been long-polluted—toxic waters, deformed animal life—and that there will be no easy way to break free.

The irony, of course, is that New Jersey is still called the Garden State despite its toxic land dumps, polluted waterways, and abandoned farmlands. It’s hardly the Edenic Garden.

Hallie changes her name from “Holly” in order to cut herself loose from those South Jersey realities. But the qualities of that birth name resonate through the arc of her story. Traditionally, the holly tree is a symbol of strength, protection, endurance—when all other trees have gone dormant for the long, cold winter, the holly tree remains verdant. It’s a perfect symbol for a young woman called home to her sylvan roots in order to protect a young brother. That might not be Manhattan “glamorous,” but those qualities are at the heart of all that is good, kind and decent.

It is that kindness and decency that Hallie rediscovers in herself and that she comes to value in others during this time. It is something she begins to love in her younger brother. They begin to come together as brother and sister in a way they never had before. As Josh works his way through his grief over the death of his father and mother, Hallie is forced to confront the unresolved grief of her own mother’s death so many years before.  There is an understanding in both siblings that building a future must include acceptance and understanding of the past.

Lisa Borders, who currently lives in Boston, in a South Jersey native. She knows the culture, the struggles, the pride of the region. Many of those farms might be abandoned now, but not for want of great effort. There was a time the people of Southern Jersey were the farmers who provided food for the entire Northeast region of the country. She knows the characters about whom she writes. You can feel that in her prose. In the struggles of these people, you feel their decency and determination. Ultimately, bravery, love and hope are celebrated in The Fifty-First State, a state that is imagined, a state in which a better life is possible.