The Bible Repairman and Other Stories 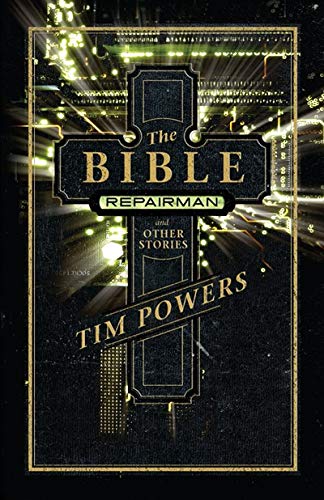 “Even if you are not a regular reader of fantasy fiction, you may well enjoy this collection. Mr. Powers is a talented writer. His stories are unique and puzzling, more than a bit bizarre, but never formulaic.”

Called “The Master of Secret History,” Tim Powers has been publishing novels since the year he graduated Cal State at Fullerton in 1976. In fact, the year he graduated, two of his novels were published. A steady stream of highly acclaimed novels and stories has followed ever since.

The Bible Repairman and Other Stories is Mr. Powers’ first new collection in six years. It contains two new stories, a gathering of short fiction that had been previously published in limited editions, and a postscript to his very popular novel, The Stress of Her Regard.

Mr. Powers is called alternatively a sci-fi writer, a dark fantasy author, an adult historical fantasy author, and a writer of “secret histories.” In each of these attempts to define Mr. Powers’ writing, there is an acknowledgment that what he writes is not of the world most people would consider the “real” one.

Yet none of the stories in this collection presents worlds too far away from the world we recognize. The reader gets the distinct feeling that there is a plurality of worlds, that the veil between them is thin, and that each has equally valid and equally undependable “realities.”

In the title story, Torrez, the man whose dead daughter’s soul was stolen many years before, has spent his life performing small adjustments to Bibles for a fee, taking out passages referring to greed for one person, and removing references to adultery for another.

This limited work is the safest he can do. His more dangerous work with the dark worlds has so drained him of his own soul that he knows there is very little left. He is aware that should too much more be taken from him, he will become like Humberto, whose mind was gone. A brother “in the trades,” Humberto had “simply not known when to retire.” He spends his days now drunk, homeless, pushing his belongings in a shopping cart.

In “The Hour of Babel,” there is a point in time in 1975 when an angel falls into a pizza parlor, nearly obliterating the structure and killing many innocent people. Some of the survivors are now prisoners of a paranormal team, trying to recreate the moment and figure out what happened.

Can such a thing be understood? Can they recreate the moment of the angel’s fall in such a way as to change the timeline? Why would an angel fall to earth in 1975 in the first place? Why that year? The reader with a fascination for contemporary history might find that a particularly interesting question to ponder.

A rare book dealer is seduced by the ghost of Cheyenne, a dead poet, who solicits his help in giving her a second chance at life, in “A Soul in a Bottle.” His desire to help her comes with the awareness that, should he help her to reverse a moment in time, he will have no recollection of any of this powerful experience.

Will he choose to lose the memory of this fascination and the wonder of this experience for the sake of this sad poetess? Is creative genius allowed to cross the boundaries between life and death on a bridge of her own poetry? Is that the way it works?

In “A Journey of Only Two Paces,” James Kohler is named executor of the will of an old college friend. The mystery of this responsibility is only compounded by the very seductive girlfriend of this dead friend, the crumbling building to which she takes him, and the sinister activities in which he suddenly realizes he is meant to take part. Memory, secrets, ceremony, and terror blend in a shadow world between good and evil, life and death.

A novella, “A Time to Cast Away Stones,” is a postscript to one of Mr. Powers’ most popular novels, The Stress of Her Regard. Both examine the lives and fascinations of the Romantic poets, Lord Byron, Percy Shelley, and Edward Trelawney. This circle of artists is known for having a fascination with the paranormal, and Powers offers some alternative explanations for the events of those lives.

Sanford Meisner, the revered acting teacher of the 20th century, once said that “Acting is behaving truthfully under imaginary circumstances.” Mr. Powers’ stories are filled with characters who behave truthfully under very bizarre circumstances, which is why the reader believes what otherwise would be unacceptable premises.

While the details and surreal qualities of the stories in The Bible Repairman and Other Stories draw you away from the world with which you are familiar, Mr. Powers’ characters anchor you in a kind of truth which offers just enough ground, just enough believability, that you remain until all elements present themselves. Mr. Powers believes in his characters, and his characters believe in his stories.

Even if you are not a regular reader of fantasy fiction, you may well enjoy this collection. Mr. Powers is a talented writer. His stories are unique and puzzling, more than a bit bizarre, but never formulaic. Subgenre writing can often fall victim to formula, but there is none of that in The Bible Repairman and Other Stories. The best writing provides a window into alternative ways of seeing or thinking, and Tim Powers’ stories do that. The Bible Repairman and Other Stories is well worth a read.