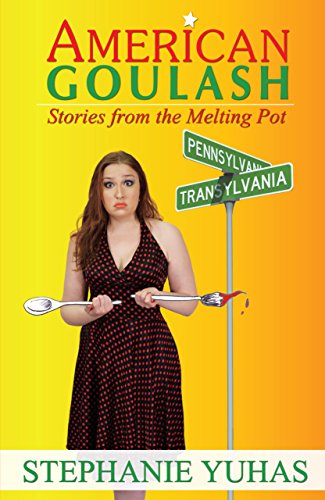 The building blocks of who we are come together in our youngest years, and the raw material of a difficult childhood provides dramatic substance for artists in all genres.

Touted as a coming of age memoir, American Goulash flows from such a childhood. Through the wit and wisdom of Stephanie Yuhas, we are given an insider’s view of what it was like to be raised by two impoverished and imbalanced immigrants from Transylvania, her mother and grandmother, whose histories land them in middle-of-nowhere, New Jersey. Yuhas pieces together shards of her family history, despite the determined silences, secrecies and misdirection.

“Much of my family’s immigration story has been shrouded in mystery, like a secret recipe someone took to their grave.  Whenever I ask the family elders about our history, they change the subject. . . . I’ve had to cobble my family history together through leading questions and booze. . . . Legend has it that my grandmother, Nagymama, was born in Yugoslavia in 1911 and immigrated to Transylvania during World War II with her sister, Felecia.  She smuggled black market toiletries to the citizens of Saint George, a primarily ethnically Hungarian region within Romania.”

The family had a history of hand-to-mouth living, shrewd quick thinking and deep paranoia, which served them well in Soviet-controlled Transylvania.   Relationships were built like trade agreements—as in, “I’ll provide you with a lifetime supply of toilet paper if you force your son to marry me”—and maintained for only as long as they were useful. Skills like this always come in handy.

Fast forward to the late 1960s, when Nagymama and her two daughters brought those talents to the United States to what Yuhas calls a “shack” in Piscataway, New Jersey: “My family’s home was the black sheep of the neighborhood. Although the other homes faced the street, our house faced the neighbor, like the creepy guy on a subway who stares at his fellow passengers in the ear. Driving down the property value of the neighborhood was our hobby.”

Childhood for Yuhas meant a kind of extended house arrest, living with her mother and grandmother, two women terrified of the dangers outside their door. The little girl’s most constant companion was a black and white TV, which she watched without understanding, since English was not spoken in her home.

As expected, the first day of kindergarten was one of great confusion for the child, since she had absolutely no idea why the people in this place spoke “the secret TV language.” Her years in elementary school unfolded, but she never lost her outsider status. As a personality who straddled the two realities—one of middle America and the other of Transylvanian paranoia—Yuhas inhabited a space permanently in between. Bullied at school, subjected to bizarre beliefs and behaviors at home, her life could easily have left her with deep emotional wounds.

As the memoir unfolds, the reader realizes, with some relief for this child, that her creativity and budding artistic ability could save her. Her experiences become raw material for her humor, her visual art and her strength. Other children could have been broken by the life she led.

For instance, from childhood, Yuhas was tied into bed by her grandmother, a practice that continued into her teen years. Nagymama also forbade frequent baths or showers, claiming that Americans bathed too often. Only one bath a week was permitted—showers were entirely forbidden since (claimed her grandmother) standing in a shower exposed your organs, causing pneumonia.

As a developing teenager, Yuhas was well aware of the need to practice better hygiene. So a ritual of deceit developed, with her waiting each evening for her grandmother to fall asleep; this is when she would then untie herself and slip into the bathroom to sneak a shower.

“If Nagymama woke up and noticed I was missing, she’d start screaming and banging on the bathroom door.  I’d have about two minutes to finish the shower before Nagymama picked the lock, barged in . . . and pulled me out of the shower . . .”

It was a smothering kind of love, Yuhas tells us. It was the only kind they knew. Most readers would agree that it was not love, but emotional abuse.  This is not the language Yuhas uses in her ongoing effort to see her caretakers in their best possible light. But after an especially insane episode, where Nagymama permanently removes the door from the bathroom, high-school aged Stephanie realized that the only way she could survive was by escaping. By the time she makes this decision, the readers may well be relieved and joyful. But of course, a child is helpless, subjected entirely to the madness of family.

As one of those miracles that sometime happens, a brochure from the University of the Arts landed in their mailbox and provided information about careers in arts and animation that Yuhas never knew existed. She knew immediately that she had to go to this school, and to do that, she had to have a scholarship. Tuition at the time was $80,000.

Straight As, Honor Society, Key Club, Student Government, volunteer teaching at a Bible School—Yuhas did everything she could to show her abilities, her community involvement, her school engagement—and she threw herself into every activity possible.

Her mother somehow became convinced that all of her explanations about afterschool activities were a lie, and demanded that her daughter come home after school each day, that she give up the attempt to get into college.  It was then that Yuhas finally realized the hard truth: She couldn’t remain in her mother’s home and still have the life she envisioned. Her escape and her ultimate triumph in attending school and building the life she wanted is the penultimate joy of American Goulash.

While Yuhas’s art and humor developed in an atmosphere of surrealism rooted in the toxic wastelands of mid-state New Jersey, it has grown significantly, as her own creative activities expand.

After receiving her BFA in animation from University of the Arts in Philadelphia, Yuhas founded her own animation and film studio, Shiny Grape Studios. She is co-founder, with her now-husband, Matt Conant, of the much-respected Project Twenty1 Film Festival. She is an animator, filmmaker, writer, and artist. By all accounts, her life is a successful and happy one. In other words, she beat all the odds and is nothing short of a walking miracle.