Met Her on the Mountain: A Forty-Year Quest to Solve the Appalachian Cold-Case Murder of Nancy Morgan 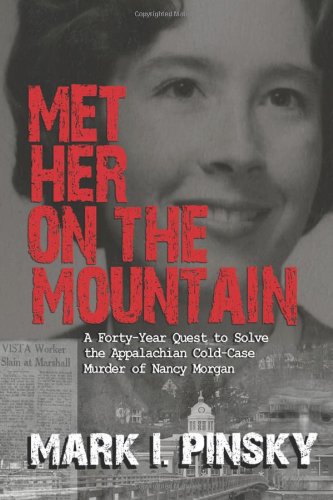 “Pinsky’s conclusion of the Morgan case is endorsed by a good number of her surviving family members; but there are law enforcement officers who . . .  vehemently disagree. Pinsky invites you to draw your own conclusions.”

Mark Pinsky is not a journalist who gives up easily. Met Her on the Mountain, the culmination of 40 years of dedication to solving the murder of Nancy Dean Taylor, is proof.

Pinsky was a student at Duke working in the office of their school newspaper on the day in 1970 when news of the murder of Nancy Dean Morgan, VISTA worker in Madison County in western North Carolina, was released.

Accounts and photos of her strangled, hogtied, naked corpse found in the backseat of her own government car haunted him. As a student involved in the struggles of the day for economic, racial, and social justice, Pinsky identified with Morgan and with the VISTA program, which sent people into the rural areas of the country with the goal of establishing anti-poverty programs.

Pinsky creates a file simply entitled “Nancy Morgan,” which he filled over the decades with investigative materials. During the years, Mark Pinsky becomes known as a journalist specializing in capital murder cases in and around the southeastern region of the U.S., including the cases of Ted Bundy and Jeff McDonnell. Even once he leaves off writing of grizzly murder cases, the long-unsolved murder of Nancy Dean Morgan stays on his mind. He begins visiting Madison County twice a year in order to keep alive a case what area residents would have preferred be allowed to sink into the shadows of a painful past.

The centuries-old culture of the Appalachian Mountain people of Madison County is not known as a welcoming one. There is a history of suspicion and dislike of outsiders, of secrecy and protecting their own. For this reason, Pinsky says in interviews that he considered the book part rural noir and part memoir—the victim’s and his own. The book offers the slow unfolding not only of his investigative work, but a slow and deepening reveal of the people of the region.

Pinsky says, “It raises the larger issue of people who have come from the outside for more than 200 years to help the people there. . . . How do you bring change while respecting the culture and faith of the people you want to help?”

Resentment of the VISTA program coupled with a more conservative set of rules caused many in the region to be shocked at the behaviors of the young VISTA women, who by their own standards, were a little too free in their manner of dress and forms of socializing. This combined with a deeply entrenched power structure—the area was ruled by one very powerful family, the Ponders and their cronies—to protect and empower some of the most outrageous behaviors of their more dangerous young men.

The result is a society in which violence and rape are viewed by some as a girl’s own doing. If she wears shorts or sleeveless shirts, if she dances, if she drinks, well, then, isn’t she a loose girl asking for whatever she calls down upon herself?  Such are the questions often asked about the likes of Nancy Dean Morgan.

Among her own family and friends, Nancy was seen as a quiet, studious, and dedicated young woman who wanted a life that was filled with meaning and purpose. Nancy’s work as a federal antipoverty worker in Madison County felt like just that kind of life. During her one-year’s service in VISTA, the 24 year old taught the community about healthy nutrition and worked with young people to create recreational activities and wholesome social activities. She planned to attend nursing school after the year’s service, but intended to return to help address the dramatic need for healthcare that existed in the region.

Madison County is a land of deeply rooted mountain culture: traditional songs, the art of storytelling; it’s a region of mountains, fresh streams and creeks, and boundless natural beauty. But it also had the Appalachian curse of deep poverty and hunger coupled with a powerful mistrust of anyone from the outside. The VISTA workers were seen by some as intruders. Was this what caused the young woman to be kidnapped, raped, and murdered? Was it meant to be an attack on the VISTA program itself? Or was it a punishment for the behaviors of a young college girl thought to be a little too openly friendly and flirtatious?

While Madison County residents themselves wanted to let the matter rest, Mark Pinsky never lets it go. He continues to dig into the well-hidden secrets of the region until gradually, some of the people of Madison begin to understand that his motives are not to humiliate or embarrass their region or them, but to find justice for the brutal murder of a young, defenseless woman.

His search has many stops and starts, just as the local and federal investigations do. Suspicion moves across a cast of characters like shadows across the night landscape, always still in darkness, hard to see clearly. Pinsky has his own theory as to who the real killer of Morgan is. In fact, the investigative officials disagree with him—he claims the murderer confessed to him three times, once in front of witnesses, and once as Pinksy tapes his narrative—the man has never been charged for the murder and is serving a life-sentence for the poisoning of his own daughter.

Pinsky’s conclusion of the Morgan case is endorsed by a good number of her surviving family members; but there are law enforcement officers who have worked the case intensely for years who vehemently disagree. Pinsky invites you to draw your own conclusions.