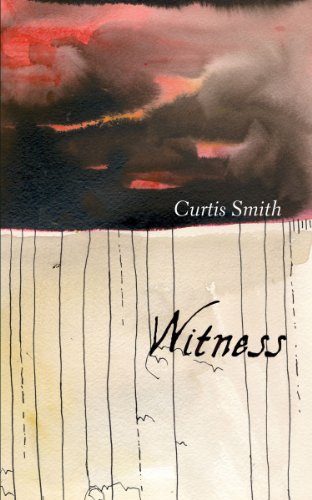 Curtis Smith is a wonderful storyteller. As a writer of fiction, he has published two collections, The Species Crown and Bad Monkey. With Witness, we get the pleasure of experiencing Curtis Smith’s talent as a writer of nonfiction.

His strong skills of observation are matched by his gift of language; and these personal essays vibrate with the beauty of a sensitive, creative intelligence. He reads the world much as a visual artist does, drinking it in with his eyes and heart; by the time he writes what he has absorbed, it has been alchemized into a kind of golden truth, archetypal and pure.

Smith himself understands this, speaking in an essay about Diane Arbus: “An artist takes his obsessions and visions and turns them into fuel, a bit of alchemy no amount of gold can buy.” It is his own talent I am thinking of when I read those words.

Witness is a wide-reaching collection. Smith takes on subjects as varied as parenthood, war, media hypocrisy, tattoos, spiritual belief, poaching, poverty, special education, high school drop-outs, and death. The daily habits of his life—family duties, fatherhood, teaching—are woven through stories set on a larger stage. Smith brings the reader along with him as he struggles to find meaning, to make connections, to understand life. In “Ink,” he writes of his doubt of an afterlife:

“Perhaps what we consider one’s soul is just the Venn diagram overlap between the physical and metaphysical, between certainty and possibility, a color unique and utterly personal, and—in the end—understood truly by no one, not even ourselves. Happy or not, loving or bitter, we sail through our days, but once our soul vessels flounder and slip beneath the surface, I’m not convinced the spirit achieves a magical transformation, sprouting wings and taking to the sky rather than going down with the only ship its ever known.”

His position on what has happened to the no-longer-so-free press in the U.S. is disapproving, but clear-eyed. “Our leaders maintain the censorship of wartime reporting is necessary to protect the privacy of our soldiers and their families, but the hard reality is that the powers that be, wary of public opinion, have embarked on a quest to sanitize war, to remove its blood-and-flesh reality and make secret its tales of ruined lives.” As a writer so dedicated to unearthing the deeper truths of human experience, Smith’s lamentations about the failings of our country’s press are strong.

In an essay called “Two Women From West Virginia,” Smith talks about Lynndie England and Jessica Lynch, whose military profiles exist, through manipulation and media misrepresentation, at opposite ends of a spectrum that travels from court-martial to hero. England, whose smiling image was so shocking in those photos of Abu Ghraib, was guilty, Smith writes, of “being present in a series of images that exposed a truth we’d been struggling to ignore.”

As the pundits on either side of the political spectrum filled the airwaves, few were asking about those who really orchestrated this torture. “Word by word, the political and social machines forged the links that bound her to a crime in which she was the pettiest of players. None of us reached out to save her as she sank into the cold water. The ice reformed, a metaphor reinforced by her swift court martial and subsequent confinement in a military prison outside San Diego.” On the other side of the spectrum was the well-orchestrated story of Jessica Lynch, touted as a hero at the center of a dramatic military rescue mission. Her sweet, smiling yearbook photo was splashed across all forms of media. The story of her bravery was spoken about everywhere.

Yet, Smith tells us, neither story turned out to be true. In fact, they didn’t even turn out to be accurate. Lynch showed more true bravery when she revealed the fabrication of the entire story of her rescue. But comparatively little attention was paid. Nor did additional information about the higher levels of power who authorized extensive use of torture clear England’s name. Smith argues that too many Americans are uncomfortable with complexities that we prefer the black/white fairy tales we are fed. “In the cases of Ms. Lynch and Ms. England, we’d been sold a pair of products, and when we discovered them damaged, we deemed it more convenient to throw them out rather than examine them to understand what had gone wrong.”

Why does the failure of our press lay so heavily on Smith’s shoulders? Because he searches daily for the unseen connections, the mysteries deserving discovery. He doesn’t want to look away, and he helps his readers to maintain their own gaze through the beauty of his language.

Watching the flight of a flock of geese, he comes to understand the plight of poverty experienced by the poachers who shoot them down. Poverty, in fact, is all around him. He sees it in the lives of his students, and struggles to understand how its grip can misshape them, hobble them.

“There is a visible weariness to the poor, the threadbare elbows of their shirts,
their oil-stained work boots. They have been bowed by hard luck, by the impossible math of making nonexistent ends meet, by the thankless choices they make each week of whether to pay the electric bill or buy medicine or repair the sputtering cars that limp them back and forth to work.”

This is not the cold observant eye of a social scientist. Rather, it is the eye of the artist/teacher, struggling to learn how he might be failing his students, what he might come to do better.

In an essay called “A Knife to the Heart,” Smith reveals his sorrow at losing a student, who drops out in his senior year, and who, we learn, is later knifed in the heart and killed. Teachers, Smith tells us, love tests; he understands that passion, but is not quite able to articulate his nagging fear that, as the educator, he may well have failed a test of his own where this student was concerned.

“With red-pen slashes, we cleave between the knowing and the clueless, between success and failure. I imagine how many times Bobby was stranded on the wrong side of that divide, and when I consider who he was and where he came from, I wonder if it wasn’t so much him giving the wrong answers as us failing to ask the right questions.”

Witness asks many of the right questions. But those questions often lead us to more complicated questions, the kind that challenge our deepest beliefs and illusions.

“Here is man, born in the image of God. Here is man: the butcher, the barbarian, the rapist, his deeds documented in myths and dated photographs and dancing electrons and in nightmares dreamt in a thousand different languages. Here is the bringer of death, amen and amen. And here too, I think as I gaze upon my son, his limbs slack and his mouth puckered by baby-fat cheeks, is man: the nurturer, the giver, the protector, halleluiah. In this moment comes the agnostic’s dilemma, his days spent in a world both too painful and too beautiful to understand.”

Smith bears witness to life in all its pain and all its beauty. Mystery cloaks our lives, but in Smith’s essays, there is a fleeting glimmer, again and again, of a transcendent understanding, born in the longing of a very human heart, and presented through the talent of a very gifted writer.