The Play's the Thing: Volumes I and II 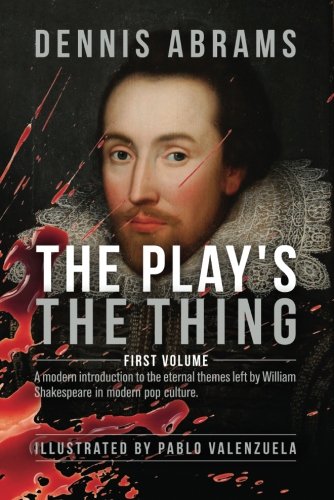 As someone who teaches humanities courses at the university level, I am often in despair at the superficiality of understanding my students have regarding Shakespeare.

As we dig into the scripts and talk about the meaning of the language, I get the same responses every semester: "Wait . . . THAT is what he meant? . . . that’s FOUL!" Or when we talk about just how sexual Shakespeare could be, it’s usually met with astonishment: "We never learned that in high school!"

In all fairness to high-school teachers, there are so many constraints upon what they can and can’t say—not to mention the amount of time they have to even teach a play when so much time is now dedicated to drilling for standardized tests—that you can hardly expect much more.

You can imagine my joy in reading Dennis Abrams’ The Play’s the Thing, which is called a two-volume  “modern introduction to the eternal themes left by William Shakespeare.”Yet it is much more than an introduction.  These two volumes are so rich, so wonderful, so full of information that educators ought to have a look.  Every high-school librarian should order a few copies. College libraries could do with a few copies, too.

Although the “target audience” is the YA reader, one of the very best things about these books is the tone. Abrams never once talks down to his reader. Instead, he talks up, and the manner of his narrative is what makes the potential audience for the work much larger.

So what makes this work so terrific? First, it is the way in which Abrams divides up the plays—he approaches them thematically. Family dramas, love stories, black comedies, fairy tales, politics and war. Of course each play partakes of themes from each category, but the primary themes are identified in this kind of categorizing.

Next, he devotes a chapter to each play, in which he discusses those over-arching themes, explores the psychology of the characters, and then delves more deeply into the story itself. Abrams breaks down quotes for their meaning—both the more superficial and (since it is Shakespeare) the ever-present subtext. This is nothing like Cliff Notes, or Spark Notes, or (heaven-forbid) Shmoop. These volumes offer much more to the reader, in a voice that is friendly, intelligent, and clearly passionate about Shakespeare.

Abrams also weaves comments and references from others of the plays into discussion with the target play, so as to further identify themes and issues through Shakespeare’s body of work.

For instance, here is Abrams introducing The Comedy of Errors:

“It’s all about finding yourself. On the one hand, The Comedy of Errors is a simple straightforward farce, which, simply defined, is this: a comic dramatic work using buffoonery and horseplay and which typically includes crude characterizations and ludicrously improbable situations. . . . But on the other hand, can it really be “just” a farce if it opens with the announcement that a character is going to be put to death within 24 hours, while at the same time seriously looking at the meaning of identity?”

This is a scholar of Shakespeare talking to a teen reader in a way that illustrates his respect for that young mind. He presents complications, asks open-ended questions, and easily assumes that his readers will explore those questions without being dragged to a stock answer.

Another thing: Shakespeare’s characters are nothing if not passionate.  Love, hatred, greed, fear, ambition, loathing—name an extreme emotion, and you’ll find it in these plays. Abrams doesn’t shy away from discussing these extremes, or in discussing Shakespeare’s assumed bisexuality, as seen primarily in his sonnets. This is another very refreshing thing about the books. They quietly acknowledge that our YA audiences have little need of being shielded from the “shocking” subject matter of the plays, or the playwright himself.

Obviously, most of these students have been bombarded with bloodshed, war, rage, violence, sexuality, pornography—you name it—through the many screens to which they are attached through each and every day.  A readers are a mature bunch. If anything, the presentation of such themes through the beauty of Shakespeare’s language may elevate the experiences, introduce the archetypes of human life, and provide some guidance for these students to make sense not only of the plays, but of the lives they themselves are living.

Additionally, Abrams provides “Fun Facts” throughout the books that talk about details of English Renaissance society, like bear-baiting, or the prohibition of women on stage, or about the many permutations of Shakespeare’s scripts throughout the centuries—details that add color and depth to the adventure that awaits the reader of these volumes.

The Play’s the Thing is highly recommended to parents, educators, librarians, students, homeschool families, young actors or theatre coaches, and Shakespeare lovers of all ages. Abrams takes his reader on a glorious journey through the world of Shakespeare, the worlds within his plays, the worlds within the human psyche—and then brings us home, transformed.