Home to Woefield: A Novel 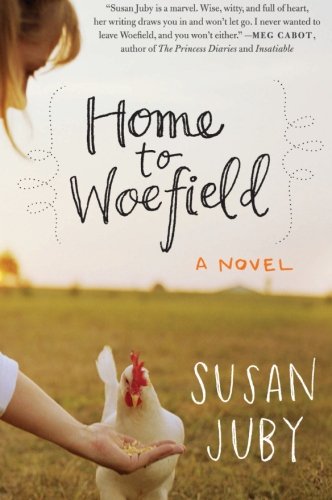 What happens when an urban dweller attempts to live a more sustainable and authentic life? Chaos. Near financial ruin. Hilarity. And, finally, triumph.

Home to Woefield, Susan Juby’s first adult novel, introduces the reader to Prudence Burns, a sincere but wacky, more-holistic-than-thou New Yorker as she inherits a farm from a long-lost uncle and moves to Canada. To get an idea of just how wacky: Her apartment in Brooklyn is fitted with solar panels for a hydroponic growbox.

Prudence is dedicated to the locavore movement and to composting. She shares her home with the very British Leo, the unemployed former hedge fund manager boyfriend, and some earthworms; but the air conditioning goes on the fritz during a deadly heatwave, the earthworms die, and Leo simply cannot take any more. Farewell Leo. Right about that time that news arrived of Prudence’s inheritance of Woefield Farm in Canada, compliments of Great-Uncle Harold, a family member she never knew.

What could be more perfect? Prudence is ready to live the pastoral dream:

“Life is funny. One day you’re struggling to make ends meet in Brooklyn, the next you discover that you’re headed to an island off the coast of Canada to make a new life for yourself and the children you would have if you weren’t concerned about overpopulation. It’s the journey that my ancestors made, only in reverse. At least I assume they made a journey like that. My parents were always reluctant to discuss relatives.”

Problems arise immediately, since Woefield Farm isn’t exactly what Prudence expects. The 30 acres are mostly dust and scrub brush and haven’t been cultivated in many years. The front porch of the house is literally falling down. There are two layers of tarp covering a ruined roof. And the barn has burned down. Lovely.

Earl, the taciturn 70-year-old handyman, lives in a cabin on the property and takes care of the one remaining sheep, Bertie, who lives in a lean-to since the barn is gone.

But Prudence is determined, she says, to establish herself “as a new and valuable resident of the area.” That means joining a church, hanging at the local cafe, joining a Ladies’ Auxiliary—or that’s what she imagines it means. She eagerly anticipates the possibility of a barn raising, or a strawberry festival fundraiser—events that will bring people together in a neighborly way, to help a new member of the community. Of course, most of that is pure, wishful delusion.

Armed with little but her good intentions and determination, Prudence sets out to make a difference to a property on which the bank is about to foreclose. She acquires a ragtag group of assistants. Earl proves to be a reluctant and suspicious handyman. Twenty-year-old Seth, who lives across the street until his mother kicks him out, takes a room at Woefield Farm in exchange for work; he’s an agoraphobic, alcoholic, high-school drop-out who blogs about celebrities and heavy metal. Sara, a tween who raises chickens, becomes part of the mix when her parents’ neighbors insist she find another place for her poultry to live.

It’s not long before Sara is living on the farm after her parents’ marriage melts down. Seth’s outrageous drinking begins again. Earl’s lack of skills at being a farmhand extends to his lack of ability in handling the lone sheep—who ends up bandaged with sanitary pads and duct tape. Worse than all that, Prudence finds that she’s inherited a “negative asset,” and that the bank is closer to foreclosure on the farm than she had realized. In an attempt to buy some time, she claims to be turning Woefield Farm into a treatment center. A string of lies begins to build, and Prudence tries to justify it to herself by comparing her small lapses of truth to the atrocious corruption of the financial industry itself. But, of course, lying to the bank soon leads to lying to others:

“I’d promised everyone that we would put up proper fences and build a barn before winter, but I didn’t have enough money and I knew when I made the promises I was not being entirely truthful. Lying had become habitual since I became a farmer.”

A wonderful juxtaposition of parody and playfulness, Home to Woefield is a joyous book about someone living out a fantasy, confronting illusions, and attempting to make a dream come true.