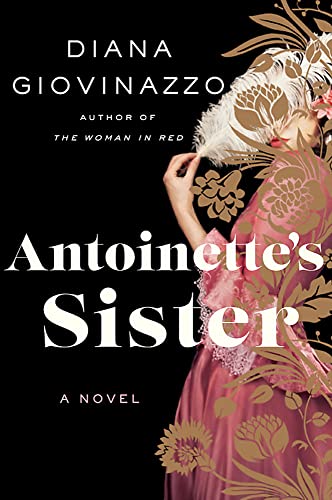 Through the centuries, Marie Antoinette has been an object of fascination, sometimes approached with pity, sometimes with derision, but never with disinterest. Her older sister, Maria Carolina, however, has received little attention by comparison, although her influence during her life was extensive. In fact, the powerful role she played on the world stage was a role of strength and dominance quite the opposite to the pawn of fate Marie Antoinette has so often been portrayed as.

During the time of Marie Antoinette’s unhappy life in France, Maria Carolina was wife to Ferdinand IV, and operating fully as the powerful Queen of Naples and The Two Sicilies. By most historians’ assessment, hers was a profile both influential and formidable, much more like her mother, the great Maria Theresa of Austria, than was her younger sister’s.

Diana Giovinazzo has undertaken in her novel, Antoinette’s Sister to introduce us more fully to Maria Carolina, called “Charlotte” by her family, beginning with her childhood and upbringing as a Hapsburg archduchess in the Austrian royal family, and ending with the end of her life and reign.

It becomes clear early in the novel that Giovinazzo’s interest and greatest strength is in exploring the emotional life of Charlotte. We’re offered an intimate view of Charlotte’s interior life while she is dealing with personal situations as well as while she is strategically claiming her ascendency in her adopted kingdom. It’s that inner life that Antoinette’s Sister reveals best.  This is not a novel that will provide you with a broader sense of the complexities of European history, or even with the deep details of the more focused history of the very interesting Kingdom of Naples and The Two Sicilies. For that information you will have to look elsewhere.

What Giovinazzo’s work offers is the more human story of a woman, who happened to be born into the powerful Hapsburg Dynasty, raised by the indominable Empress Maria Theresa, handed off in an arranged marriage to a man, King Ferdinand IV, who was intellectually and emotionally underdeveloped and by most accounts, ugly to the point of being repulsive.

Antoinette’s Sister then charts Charlotte’s developing abilities, as a wife, a mother, and ultimately as the powerful de facto ruler of her kingdom. It is a coming-of-age story. But as is often the case, those strengths also found expression in their own shadow behaviors—being imperious, sometimes impervious to the winds of change, and to Charlotte’s ultimately over-estimating her power. The confidence and strength of Maria Carolina proved insufficient to turn back the tide of revolution or prevent the execution of her sister. The world was changing in a way that saw even the most powerful were swept away.

Her mother is at least in part to blame, since she raised her children to take their places of leadership throughout the courts and kingdoms of Europe but didn’t see any need to teach them to understand the people who would be their subjects. Given the revolutionary fervor of the late 18th century, this failure proved ruinous.

Family loyalties play a large role in the novel, since Charlotte often communicated with her mother and her siblings—in particular, her sister Antoinette, and her brother Leopold. Unfortunately, as the novel progresses, much of what we hear of those family members comes in the epistolary form. The book is sprinkled through with letters (most of which are presumably fictionalized) that stand between chapters of Charlotte’s own narration. These letters, however, rarely receive a response in the narration that follows. They are, rather, dropped in to serve almost as headlines along the timeline of this complex time in history. So while the readers may wish for more information, or desire a response on the part of the main character, they are often disappointed; Charlotte’s narration frequently picks up from points unrelated to the letter immediately preceding. The book would have been well served had those letters been more tightly woven into the greater narrative.

Given the focus on the personal and the family interrelationships, it was surprising that the novel did not go more deeply into Maria Carolina’s grief over the horrible death of her favorite sister, who in childhood was almost her twin. We saw Charlotte’s anger, but we didn’t see the depth of heartbreak. This much more vulnerable characteristic would have revealed aspects of Charlotte to the benefit of the portrait Giovinazzo paints. The stage was set; the themes were there. Sisters, twin spirits, mirror images—one strong, the other weak. Themes of power, strength, survival, death. In a novel so focused on revealing the inner life of its main character, it is a puzzling avoidance. The reader can almost feel the way in which the book pulls away from this exploration. By then, however, the portrait of Charlotte has been painted well enough that  readers can supply their own assumptions about her grieving.

Antoinette’s Sister is a worthwhile read, and thanks are owed to Diana Giovinazzo. It may well encourage further exploration on the part of the reader, and perhaps other scholarly and creative work in regard to both Charlotte and the history of her kingdom. There is so much material left to be developed about this most tumultuous time in European history; perhaps Giovinazzo would continue, offering other related novels that would expand the world she has begun to uncover for us. A series would be well-received.