Things We Didn't Say: A Novel 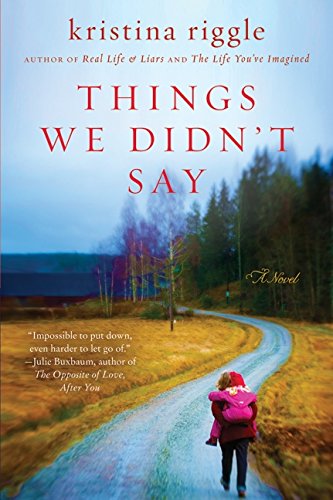 “Sadly, the elements that would have made this a more compelling novel remain missing. That which we are hoping to understand, unfortunately, still remains unsaid.”

Things We Didn’t Say, the third book by Kristina Riggle, is a novel that presents us with a relatively young woman, Casey, involved with Michael, a man ten years her senior and a full-time divorced father of three children. There are some timely situations included in the book, such as the meltdown of Michael’s job in traditional newspaper publishing, an industry many believe is breathing its last. There are also common issues of divorce, young girlfriends, angry ex-wives, difficult teenagers, and parents from the WWII generation who don’t understand why their children can’t seem to build successful, sensible lives.

Common ingredients can create an expected outcome when you are making meatloaf. The same is true for books. That doesn’t necessarily make the outcome good.

There is a recipe here, used in a plot-driven structure, with the result being called “women’s fiction” by the Morrow press release that accompanied the book. This feels, somehow, insulting to intelligent women readers.

There was potential here to develop fascinating characters and to examine up close the kinds of situations caused by people behaving very badly. That potential wasn’t realized.

Why, for instance, is Casey, a young IT professional of the third-wave feminist generation, doing the lion’s share of housework and childcare in Michael’s home? Why is she enduring the criticism of this man as she stacks his dishwasher and carpools his children? Yes, she has a secret that she’s concealing; but there are plenty of 20-something women out there with secrets. That doesn’t mean they sentence themselves to a life of 1950s-style housewifery using the vague excuse that their man’s job is stressful. That sounds like something that would come out of the mouth of a TV sitcom character like June Cleaver. There is much more to be mined from this character’s willingness to indenture herself in this way; sadly, that doesn’t happen.

Why does the teenage son, Dylan, take off with a Facebook romantic interest? He’s unhappy at school, we are eventually told. Immediately after he disappears, there is the fear that the boy has been lured by someone pretending to be a teenage girl. But that fear is quickly dispelled, and the two teens are in fact off together, with a much less interesting story to offer up: They were just hanging at a mall when they are picked up for shoplifting and returned home. Beyond his apology, little is revealed of the impact that this experience has on the boy’s character; and after the event is over, nothing more is said of the young girl.

The boy’s disappearance feels more like an empty plot device used to explain the sudden appearance of the unstable ex-wife into Michael’s home. After her arrival, the character spends much of her time sniping at Casey, finding ways to undermine the relationship her ex has with this young woman. Casey spends an inordinate amount of time sniping back. It feels thin, becoming tiresome very quickly.

During the time of the boy’s disappearance, there are vague mentions of the older sister’s developing anorexia, another potentially powerful storyline never fully addressed. There is the conflict between Michael and his very successful father—who makes his disappointment of his son clear on a regular basis. This is resolved in a sudden epiphany on the part of the father, who apologizes and turns over a new leaf. Entirely. Overnight.

There is also a journal of Casey’s upon which some major plot points turn. It is just chock full of all her secrets, but left in the bedroom where the older daughter finds and reads it. Who would leave such a damning journal laying around a house with teenage children afoot? Upon the son’s safe return home, he and his sister begin speaking as if they were coached by one of the current TV Psycho-Babblers—Dr. Phil style. Which brings up the point of dialogue. No character in this book speaks consistently in a believable way. The incessant hysteria of the ex-wife is met by an ex-husband who offers up excuses equivalent to saying, “Well, she’s upset.”

At yet another pivotal point in the plot, the ex-wife suddenly begins behaving entirely differently, cooing over Casey and inviting her confidences. And Casey, without any apparent suspicion, starts spilling them. Who would do that? There’s no preparation in the story for such gullibility on the part of this young woman. Instead, it feels like another plot device meant to bring us to a point of betrayal that any dimwit could have predicted.

Things We Didn’t Say is a disappointing novel. It feels more like the draft of a novel that could have had depth if more time had been taken, if the characters were fully developed, and the dialogue were consistently crafted. Sadly, the elements that would have made this a more compelling novel remain missing. That which we are hoping to understand, unfortunately, still remains unsaid.