The Autobiography of Somebody Else 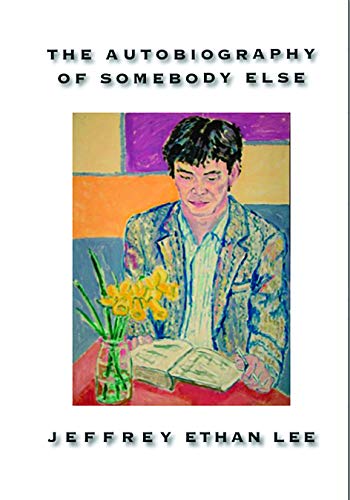 “I’d always tried to seek the truth and to faithfully record the spontaneous overflow of accidents that life is. But at the same time, I always knew I was living the autobiography of somebody else.”

There are times in our lives that haunt us, no matter how many years go by.  There are relationships that refuse to stay in the past, people who become some strange combination of character and memory. Even more complicated is the refusal of our past selves to stay where they belong; a parade of variations of you—those “selves” you have been—can fill the dark rooms of your mind, hang out stubbornly demanding retakes of moments or events that remain, somehow, unresolved. That is what Jeffrey Ethan Lee’s Autobiography of Somebody Else struggles to understand.

The memory’s time is not linear. It is, sometimes, a spiral. It is a fractured mirror with shards reflecting only portions of what you are trying to see.  None of the pieces fit together anymore, so you are left gazing at slices, slivers, unsatisfied and rarely able to fill in what is missing.

Maybe it’s for that very reason—the impossibility of reconstruction—that we return again and again to those shards, trying again and again to rearrange them, to intuit the larger picture. Such is the fractured structure of much of The Autobiography of Somebody Else, where Jeffrey Ethan Lee finally comes to understand that he has to confront this parade of selves.  In particular, he has to confront a personality he created as a youth, christened “Cayle,” and constructed the way a playwright builds a character. Not only did he have to reconnect with his process of creating “Cayle,” but he had to re-experience the events that led to Cayle’s attempt at self-destruction. Finally, in the role of autobiographer, Lee had to bring the person he is now into a relationship of active “deconstruction” of the character he once attempted to be.

“I found it wasn’t enough to go through Hell or Heaven or see the breath of God in the shape of someone’s face.  I still had to go back to . . . the self I was before. I had to learn the truth about that almost killed self and what he knew, and I had to let him speak.”

There is little in life more frightening that confronting our past selves. Lee calls this book a “noir autobiography” because it has elements of noir fiction. But here, Lee himself is the detective, digging through the underbelly of memories darkened with time and shame, to expose a past identity that is, at once, both his own and that of the “other,” who functions as a self-destructive protagonist.

Jeff Lee, a poet whose award-winning books of poetry include identity Papers (Ghost Road Press, 2006), Invisible Sister (Many Mountains Moving Press, 2004), The Sylf, (2003), and Towards Euphoria (2012), brings his poetic sensibilities and acuity of language to this autobiography. He explores the past, reenters the reality of youthful confusion, tries on the death wish of his former self the way we might slide into an old, rediscovered article of clothing, long forgotten in the back of the closet in your childhood bedroom. He hopes it no longer fits.

As a youth rejected by his parents, uncomfortable in his own skin, our character desperately tries to find where he might belong in the world.  Neither a new name, nor a ceremonial and spiritual dedication to art could heal the emptiness he feels; but being so young, and so without guidance this failure feels like his own shortcoming.

The picture painted of the other youths in his circle is one of combined audacity and insecurity—typical of their age. The loves and longings described are also those of the immature, the inexperienced.

But since most of us have lived through this misery of adolescence, we also know how interminable the unhappiness can feel—how permanent and unchanging.

The story Lee tells of “Cayle” is the story of a boy who succumbs to that despair and attempts to end his life, and in that act of attempted self-destruction, he finds yet another identity—one that ultimately frightens and drives away the few companions he had, re-wounding that rejected child when he was at his most vulnerable.

Lee tells us, “Nothing is worse than outliving one’s own tragedy . . .” But what he shows us is that for most people, it is our destiny not only to outlive our tragedies but to reach a point where we finally refuse to be dwarfed by them. Wanting to die as a teenager might be understood as a sign of sanity, not its opposite. Trying to die, however, must ultimately come to be understood as a misunderstanding of that death wish. That is what Lee discovers.

“Murder, even of oneself, is empty. That is all it is. It falls beneath all the meanings we give it. If it has an opposite, it is love being realized fully. That recreates meaning everywhere, but murder is the mother of lust, just as meaninglessness begets defilement. I thought in dying I would signify something—even be understood—or at least heard. But I could not have this rage as my epitaph. I returned—incidentally—to meaning.”