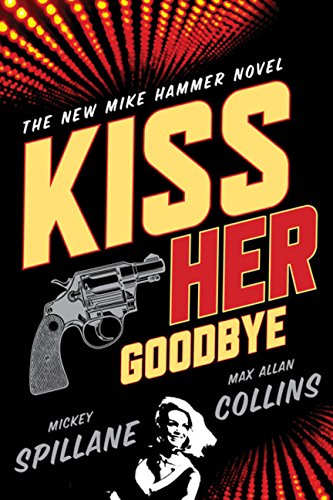 This book, the third Mike Hammer thriller begun by the late Spillane and completed by his protégé Collins, takes place in the mid 1970s.

Hammer is in sunny Florida recuperating from several bullet wounds; the results of a shoot-out on the New York City docks with the crazy son of a mob boss. Emotionally wounded as well as physically, Hammer has fled the Big Bad Apple, deserting his friends and most importantly the one truly love of his life, Velda. He is determined to spend the rest of his days basking in the sun and deepsea fishing. But when his pal, Detective Pat Chambers calls with the news that his old mentor, Inspector Doolan is dead, an apparent suicide, Hammer has no choice but to pack it up and return to the asphalt jungle.

So begins one of the most convoluted mysteries the tough-as-nails Hammer has ever confronted. Doolan had been diagnosed with cancer and his days were numbered. Everyone, including the coroner, is convinced he shot himself in the heart before the end became too painful to endure. Hammer doesn’t buy it, even though the evidence is stacked against him. It doesn’t feel right. His love of the old warhorse tells him Doolan would never have succumbed to what he always referred as “the coward’s” way out.

No sooner does Hammer start poking around, visiting Doolan’s friends and a few of his enemies, then he and Pat stumble on the body of a young waitress stabbed to death only a few blocks from the funeral service for Doolan. Is it random coincidence; just another senseless death on the mean streets of the city? If so, then why does the newly appointed, highly ambitious assistant district attorney show up at the crime scene? What is her interest in a supposedly routine slaying?

With each passing hour, Hammer uncovers facts that on the surface appear totally unconnected. From a former gangland heir operating the city’s fanciest disco for the rich and famous to a legendary jewel with ties to Nazi war criminals living in South America.

Couple this with Hammer’s own confused emotions about being back in the steel canyons he both loves and hates and the stage is set for a slam-bang adventure unlike any the savvy gumshoe has ever encountered.

This book is packed with fast guns and dames and plenty of punches all culminating in a shootout that makes the Gunfight at the OK Corral look like a picnic! In a world that has become soft and compromised with the corruption of “political correctness,” having Mike Hammer back to plow through the BS and uncover the truth, no matter the cost, is a jolt of clear headed sanity—of which we all need lots more.