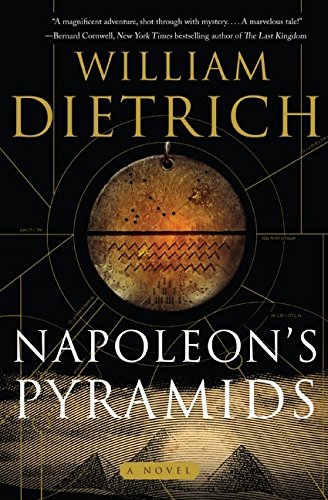 In the year 1798, Napoleon Bonaparte invaded Egypt. His obsession? The wish to make himself a modern day Alexander the Great. What he did was not so much a great military achievement as much as it was an academic watermark for history. As writer William Dietrich marvelously depicts, Napoleon actually helped create the archeological science of Egyptology.

It is against these world altering events that Ethan Gage, the protagonist, finds himself ensnared and sent on the adventure of a lifetime. A former protégé of the late Benjamin Franklin, young Gage, a one-time frontiersman, returns to Paris as an entrepreneur with the goal of making himself rich. He is acting as an agent between various companies in both the newly independent colonies and their ally France. But this France is one still governed in post-revolution chaos, the memories of the blood-stained guillotine still fresh in every citizens’ thoughts.

When Gage wins a very odd looking medallion of Egyptian origin from a luckless soldier in a card game, he soon finds himself the target of deadly, mysterious factions. His favorite brothel mistress is murdered and evidence planted to indict him. A journalist companion suggests he join a group of scientist traveling with Napoleon to Egypt for the grand invasion and Gage is only too eager to accept the protection of the little corporal to evade the Paris police.

Once in the land of the Pharaohs, he becomes even more ensnared in the mystery of the medallion and that of an exotic beauty who may hold the key to its meaning. But is she a friend or foe? Does the medallion contain the means of unlocking the power of the great pyramids and if so, can this power be harnessed by human will?

Napoleon’s Pyramids is a wonderful historical adventure, and Ethan Gage, surviving by his wits and courage, proves to be a bona fide, colonial version of Indiana Jones. The story is a mystery, thriller, and historical travelogue—all rolled into one glorious package. It is a fun read that delivers what the title promises: an original, one-of-a-kind adventure.