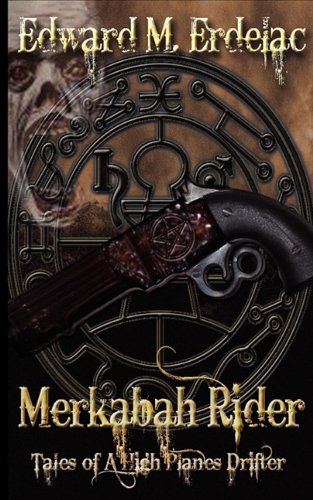 Although the straightforward, no frills western genre seems to exist only in today’s paperback market, where the proliferation of the “weird” western tableau is visible everywhere. Graphic novels and prose anthologies have been expanding this pulp theme strongly and recently Hollywood has joined in with films such as Jonah Hex (a cowboy who can speak to the dead), The Warrior’s Way (pitting Japanese Ninjas against cowboys) and the soon to be released blockbuster, Cowboys vs. Aliens—the name says it all.

Up until a few weeks ago, I’d pretty much thought there was nothing else to be added to this genre of bizarre westerns. Happily Edward Erdelac has proven me wrong with his Merkabah Rider: Tales of a High Planes Drifter.

The giveaway is in the spelling of the word planes. For, you see, the hero of this book is a Hasidic Jew mystic known as a Merkabah Rider because of his ability to travel out of his body and explore the higher and lower realms of heaven and hell. In fact, the Rider, as he prefers to be called, actually travels the post Civil War southwest on foot, pulling a dirty white onager behind. An onager is an Asiatic wild ass. I had to look that up, too.

Through the four stories in this volume, we learn that the San Francisco born Rider interrupted his religious studies to serve in the Union Army during the War Between the States, a decision that turned many of the elders of his order against him.

He returns home to discover all the members of this enclave, known as the Sons of Essenes, have been murdered by his renegade teacher, a man known only as Adon. Feeling spiritually tarnished by his association with Adon, the Rider begins his quest to seek him out and exact vengeance. In the process he travels the globe until his quest brings him full circle back to American desert lands of the southwest.

Which is where this first book begins. In the quartet of adventures collected here, the Rider battles a foul Demon sacrificing children in an Arizona mining town, combats a dust devil that animates a hellish windmill in a Mexican border town, goes up against a cursed gunman who slaughters entire towns, and confronts a powerful, alluring succubus said to be the first wife of Adam. Through these travails, the Rider learns that Adon is conspiring with the demon world to bring about an earthly holocaust that will herald the end of all mankind. Unless he, alone, can stop him.

Merkabah Rider is a terrific read that captivated me from the first page to the last. The exhilaration of discovering something new and vibrant in an old setting provided this reviewer with complete and unabashed entertainment. The Rider is the most original western hero since Clint Eastwood’s Man With No Name and his background in the exotic magic of ancient Hebraic mysticism make him a character this reader will not forget anytime soon.