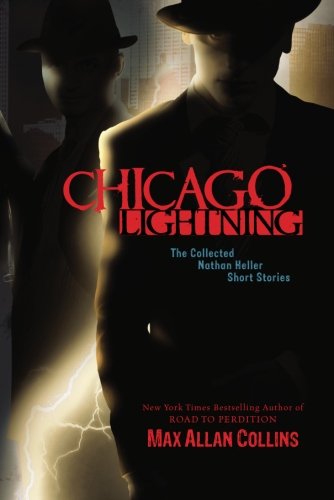 “There is not a lemon in this batch of stories. Mr. Collins’ writing style is terse and economically efficient. He uses words like a scalpel—carving up the psychological motivations that induce people to do bad things, with Nathan Heller his surgeon, meting out equally doses of justice and compassion. The title, Chicago Lightning, is gangster slang for gunfire—fitting as this book comes heavily loaded with pure pulp pizzazz. Don’t miss it.”

Sixty-three-year-old Max Collins has been at this writing game for a while, coming onto the mystery private-eye scene with his 1994 Shamus Award-winning True Detective, published the year before.

Since that monumental debut, Mr. Collins has gone on to produce several continuing series both in comics and prose; these include his comic book female P.I. Ms. Tree, and the morally ambiguous hit-man, Quarry.

The one fictional character Max Collins is most recognized for is Nathan Heller from Mr. Collins’ historical crime novels. Heller is a Chicago based investigator who, over the course of his career, rubs shoulders with personalities such as Al Capone and Eliot Ness and worked on such mysteries as the Lindberg baby kidnapping and the disappearance of aviatrix Amelia Earhart.

His most recent Heller case was the critically acclaimed Bye Bye, Baby wherein the fiftyish shamus becomes involved with the death of Marilyn Monroe. All of these books are excellent and worthy of time and attention.

Over the years, Max Collins, at the request of anthology editors, also penned short stories featuring Heller. With the assistance of his research colleague, George Hagenauer, author Collins adapts true crime stories and then weaves his tough guy hero into the fabric of these stories so that the historical and fictional elements become indistinguishable.

Chicago Lightning has taken that baker’s dozen and for the very first time presented them in chronological order from the first criminal event in 1933 to the last set in 1949. The settings range from Chicago to Cleveland and Hollywood. Here is a sampling of what is included between the covers.

“Kaddish for the Kid:” Heller is hired to protect a retailer from a crooked union scam in reality a protection racket. During a street shootout, his young partner is killed and the angry private dick goes after the killers with a vengeance.

“The Blonde Tigress,” has Heller investigating a trio of stick-up artists led by a female boss who tries to manipulate him into aiding her escape justice.

“Private Consultation,” has a well-known Chicago doctor accused for murdering her daughter-in-law and her son hires Heller to investigate. What he uncovers is a sad testimony to a loveless marriage where none of the participants are innocent of wrongdoing.

The Perfect Crime,” finds Heller in Los Angeles to help a friend. Before he can pack up and head home, he’s hired by the beautiful blonde star, Thelma Todd, to act as her bodyguard. Miss Todd suspects mobsters wish to do her harm for refusing to allow Lucky Luciano to use the top floors of her famous restaurant as a casino. When she is found dead in her garage from carbon monoxide poisoning, Heller knows the coroner’s accidental death ruling is pure bunk. He decides to extend his trip to catch a killer.

In “House Call,” a caring doctor is brutally murdered while answering a nighttime summons to aid a sick child. This time Heller joins forces with the Chicago P.D. to hunt down the vicious killers and bring them to justice.

“Marble Mildred” tells the story of woman trapped for 14 years in a loveless marriage who discovers a humiliating secret which she’d rather go to the electric chair rather than having it made public—a tragedy Heller is helpless to prevent.

“The Strawberry Teardrop” is based on the case of Cleveland serial killer, the Mad Butcher of Kingsbury Run, and how he was finally caught by the famous lawman Eliot Ness.

There is not a lemon in this batch of stories. Mr. Collins’ writing style is terse and economically efficient. He uses words like a scalpel—carving up the psychological motivations that induce people to do bad things, with Nathan Heller his surgeon, meting out equally doses of justice and compassion. The title, Chicago Lightning, is gangster slang for gunfire—fitting as this book comes heavily loaded with pure pulp pizzazz. Don’t miss it.