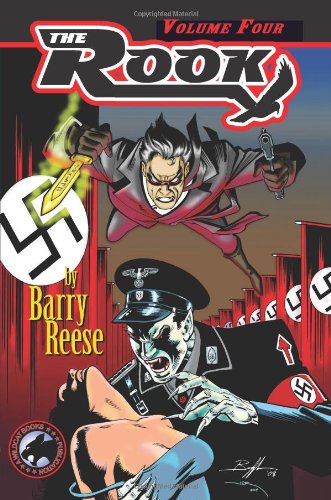 He’s back, the daring pulp avenger from Atlanta, GA, in six new, thrilling tales of mystery and mayhem. Keeping with his horror themed exploits, Reese pits the ever stalwart Max Davies and his allies against a group of Nazis vampires, a long dead pirate ghost, and an old enemy who crosses paths with the Frankenstein monster.

Each of these stories is filled with colorful classic pulp heroes from the Black Bat and Domino Lady, to their arch-enemies like the red-garbed Doctor Satan. The real fun is how Reese adds to this melodramatic stage his own creations starting with the Rook and then including such iconic figures as a Russian-style Doc Savage and a female version of the Phantom—all without skipping a beat.

When reading these books, it’s a real joy to see old nemeses return time and time again like the Warlike Manchu, who at one time had been Max’s mentor. When he revealed his true villainous nature and attempted to recruit the hero to his world conquering cause, it immediately launched a furious war between the two. And like all true pulps, even death cannot stop these monsters from coming back time and time again.

So why does the Rook do it? Why does he constantly put his life, and those of his family and friends, in jeopardy? Because, like all true heroes, he has no other choice. His soul has been cast in a timeworn mold of nobility and courage; he is a defender of the weak and the powerless, and frequently all that stands between the world and total destruction. Tired, weary, scarred, and haunted, he presses on, fighting the good and neverending fight and in the process delivering amazing, fun-filled page-turners that are not to be missed.

Reese and the Rook are now four for four and that’s saying a lot. We can’t wait to see what Volume Five will bring.