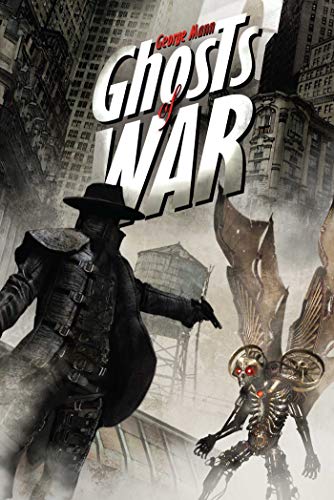 Hot on the heels of earning a Pulp Factory Award nomination for Best Pulp Novel of 2010 for Ghosts of Manhattan, writer George Mann unleashes the second novel in this steampunk series. Although considering the archetype pulp trappings these books are totally saturated with, one would suggest labeling them steampulp.

This new adventure of Gabriel Cross, the haunted veteran of World War One who protects New York City as the rocket-boot propelled, black garbed vigilante known as the Ghost, begins only a few weeks after the end of his last, horrific case. He is still emotionally wounded having witnessed his lover, Celeste, sacrifice herself to save mankind from outer-dimensional monsters.

When a new threat to his city arises, he gratefully dons his Ghost garb and goes into action. Weird hybrid mechanical flying creatures called Raptors are swooping out of the night sky and randomly kidnapping people with no apparent pattern or purpose other than to cause citywide terror. The Ghost sets about catching one of these horrible monstrosities with the help of his friend, Inspector Felix Donovan, who shares his secret identity.

At the same time, Donovan is given the task of hunting down a British spy by his superiors. He is told the secret agent is a catalyst with information that will ignite a war between England and America. When elements from both assignments suddenly come together, the Ghost and Donovan begin to suspect a much darker plot with tendrils leading to corruption among the highest ranks of City Hall.

In the end the Ghost allows himself to be captured by the raptors and taken to their hidden lair. It is his one chance to uncover the evil mastermind behind the attacks and discover the true horror that awaits all mankind unless he and his small band of allies can save the day.

Hideous creatures from another dimension, a mad scientist more machine than man, an armed, massive airship on a mission of doom, and more thrill-a-minute action than any other ten, oversized thrillers on the market today. Ghosts of War is even better then its predecessor as Mann is truly warming up to this alternate world and his remarkable, colorful and appealing cast of characters that populate it.

This is new pulp fiction at its finest, and I’m predicting there’s another Pulp Factory Award nod in its future. Long live the Ghost!