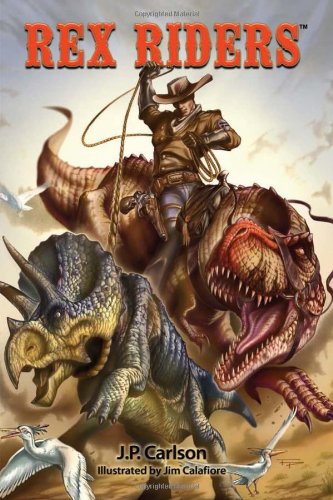 “Rex Riders is a deft blend of action, humor, and wall-to-wall adventure in a truly original setting. Reading it was nothing short of pure joy, . . .”

It was somewhere between the ages of 12 and 13 that I discovered the classic pulp heroes of old through paperback reprints. Here were 1930s’ urban heroes such as the Shadow and Doc Savage, while primal, wilderness characters were represented by Robert E. Howard’s Conan the Barbarian.

At about that time I also discovered one of the greatest pulp authors of all: Edgar Rice Burroughs. My entry into Burroughs’ fantastic worlds—like most of the readers of my generation—was through his Tarzan books. Having already become familiar with the Ape Man via movies, it was both a treat and surprise to discover the actual character in Burroughs’ purple prose.

Becoming addicted to his work, I, as a logical next step, picked up his equally popular John Carter of Mars series starting with A Princess of Mars. On the off chance there is someone reading this who has never had that pleasure, here is a quick recap: The series tells of an ex Confederate officer named John Carter, who, while mining for gold in the Arizona badlands, is somehow magically transported through space to the red planet Mars. There he finds it inhabited by all manner of beings and monstrous creatures that refer to their world as Barsoom. Carter has one glorious adventure after another; finds his love, the beautiful princess Theja Thoris; and goes on to become the Warlord of Mars.

I devoured those books. I’d never encountered anything else so filled with action, exotic characters, and unabashed imagination as displayed in that amazing series. Of course the popularity of Burroughs’ alien tales inspired hundreds of writers to follow in his footsteps, many attempting to duplicate the verve and grandeur of his Barsoom titles. None ever came close, until now.

From the first chapter of J. P. Carlson’s book, Rex Riders, that same magical what-if that Burroughs so effortlessly created is evident.

Set in the sleepy Texas town of Dos Locus, post U.S. Civil War, what Carlson brilliantly does is turn the tables on the Carter device and brings an alien romantic hero to Earth in the form of the Rex Rider.

The book’s protagonist is 15-year-old orphan, Zeke Calhoun, who is being raised on his Uncle Jesse McCain’s ranch. His two best friends are Bull, McCain’s loyal ranch hand, and Stumpy, the old cantankerous and wise ranch cook.

Growing up to be a cowboy is not an easy life, and Zeke is constantly butting heads with his uncle, their ability to communicate constrained by their ages. Having never married or had children, McCain finds bringing up a rambunctious teenage boy much more complicated than herding cattle.

Then one day a live triceratops comes charging down Dos Locos’ main street, attacking the arriving stagecoach. After toppling the coach, the confused, armored beast then goes on a rampage and destroys several of the town’s stores before it is shot by McCain. Before anyone can even attempt to explain the creature’s presence, let alone existence, the area’s most powerful landowner, Dante D’Allesandro comes along, offers to pay for the damages, and whisks the carcass away. No one gives the incident a second thought. I give much credit to Carlson’s depiction of good, decent, and simple people who would react exactly as he writes them.

Months later, while riding through a nearby valley, Zeke and Stumpy come across a truly bizarre scene. An alien humanoid, comatose on the ground after having been shot, and standing over him protectively is a baby Tyrannosaurs Rex with a saddle strapped to its back. With much effort, the two manage to haul the eight foot rider onto the back of his dangerous looking mount and get them back safely to McCain’s ranch. After the town doctor removes half a dozen bullets from the purple hued alien, and he recovers, he relates a fantastic tale to McCain and his crew.

Slim, the name Stumpy gives the alien rider, is from a planet called Ismalis, where millions of years ago his ancestors, using amazing transporters, rescued large numbers of the Earth’s dinosaurs when they saw they were in danger of becoming extinct. Now they thrive on Ismalis and as a Rex Rider, it is Slim’s duty to see they continue to do so.

Unfortunately D’Allesandro has learned that it was via one these transporter platforms, hidden in a nearby mountain cave that the runaway baby dino traveled from Ismalis to Earth. D’Allesandro then begins to transport a group of cowboys to that alien world to build a camp from which they can rustle hundreds of trykes and bring them back to our world. When Slim attempts to stop him, warning that his scheme can only end in disaster for all involved, D’Allesandro’s hired gun, Caleb Cooper, attempts to kill him and his T-rex mount, called Hellfire.

McCain immediately sees the folly of D’Allesandro’s plan and offers his support to the Rex Rider, along with Zeke, Bull, and Stumpy. Together these new allies have to travel to that strange and dangerous world and set things right.

Rex Riders is a deft blend of action, humor, and wall-to-wall adventure in a truly original setting. Reading it was nothing short of pure joy, easily recapturing the fun I’d had when first discovering the John Carter of Mars books. And if that isn’t a cause for celebration for today’s pulp readers, I don’t know what is. In fact, I love this book so much, I’m giving it to my grandson, Alex, assured it will set him on a path I first walked over 50 years ago. Thanks, J. P. Carlson. With your first book, you’ve made a loyal fan who is very, very anxious for the sequels to this wonderful work.