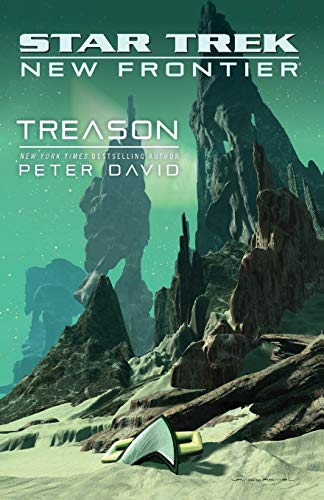 The only problem I ever have with Peter David’s unique and original Star Trek paperback series is that they appear too infrequently. Of all the literary spin-off series based on the late Gene Roddenberry’s science-fiction adventure television series, New Frontier is simply the best—all due to David’s easy style of writing and his marvelous ability to interweave characters from the other media with his own creations, especially that of the character Captain McKenzie Calhoun of the starship, Excalibur.

At the end of the last book in this series, Missing in Action, we discovered that Xy, the half-breed son of Vulcan medical officer, Selar, suffered from a rare malady that caused accelerated growth and within weeks of his birth he had become a fully matured adult—the obvious implications being that he would reach old age quickly and die.

As this new novel begins, Selar is contacted telepathically by an unknown race of aliens who claim to have the ability to slow down Xy’s metabolism and thereby save him. But they will only share this knowledge with her if she will kidnap another baby of mixed heritage and bring it to them. The child they want is the half human/half Thallian son of the late Si Cwan, ruler of New Thallon and his widow, former Star Fleet officer, Robin Lefler.

And if this were not enough drama, once Selar flees with the baby aboard an ultra sophisticated Romulan spy ship, the ghost of Si Cwan somehow possesses the body of his young sister Kalinda and begins to advise Calhoun on how to pursue the renegade Vulcan and reclaim the stolen heir.

The pacing is frantic and as always, David brings his colorful cast to life, injecting each with a truly singular personality. Because he subtly allows us to see their inner motivations, dreams, and fears, we become instantly invested in their predicaments when the action heats ups. Which is quite often in this runaway sci-fi thriller. As always, David delivers such a solid reading experience, the ending arrives too soon, even after 400 hundred pages, and leaves us wanting lots more.

Even if the Star Trek franchise is not your reading cup of tea, this reviewer still recommends sampling New Frontier. It’s truly a cut about the others and one of the finest continuing sci-fi series on the market today.