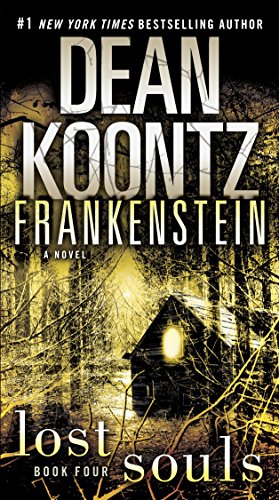 “Mr. Koontz’ most audacious pulp novel to date. It is a bold, raucous narrative that moves at lightning speed.”

Horror fantasist Dean Koontz continues his bestselling series about the never ending war between Mary Shelly’s mad scientist Victor Frankenstein and his immortal creation, the Monster—now known in these books as Deucalion. This is the fourth book in the saga and the beginning of a brand new story arc.

In the opening trilogy, which took place in New Orleans, the 400-year-old obsessed genius set about creating an army of super clones who would ultimately replace imperfect humans as the new dominant species on Earth.

He was foiled by Deucalion and two brave police detectives, Carson O’Connor and Michael Maddison. By the third book’s climax, they believed he had been killed and the world saved. What they were not aware of was Frankenstein had cloned himself and this doppelganger came to life upon the death of the original.

Lost Souls opens two years later after the first conflict to find Carson and Michael have married, moved to San Francisco, opened a private detective agency, and had a child, a beautiful baby girl named Scout. For the most part their lives couldn’t be any happier. This is why Deucalion’s reappearance bodes ill tides. He has learned that his creator is still alive and hiding in the small town of Rainbow Falls, Montana. What the patchwork warrior does not know is that his cloned nemesis is completely insane and unlike his predecessor, has but one goal: the total annihilation of all mankind, both originals and replicants. He dreams of Armageddon.

Frankenstein: Lost Souls is Mr. Koontz’ most audacious pulp novel to date. It is a bold, raucous narrative that moves at lightning speed. Horror upon horror is visited on the small, peaceful town of Rainbow Falls and author Koontz never once spares his readers with his lean and brutal prose. His fans are going to devour this latest chapter in what has become a truly classic pulp series.

New readers need not have read the first trilogy, although it would add much to their enjoyment of this entry, book one in another trilogy. And be aware, this book is only the first part of the story and ends with a suspenseful cliffhanger. The only really sour note is we now have to wait for several months for part two. Now that’s torture at its most sophisticated.