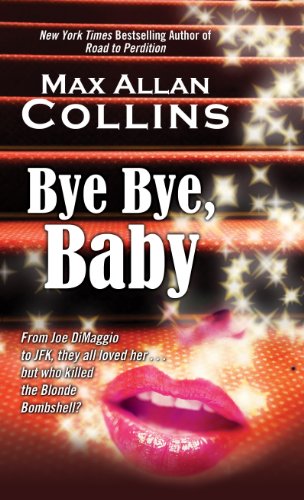 “. . . both a fast paced thriller and a history at the same time. Talk about more bang for your buck. . . . perhaps the author’s finest book ever.”

Sometimes it’s all too personal. Or so Chicago based private eye, Nathan Heller discovers when he’s asked by his friend, Hollywood sex symbol and superstar Marilyn Monroe to help her in her battle with Twentieth Century Fox.

The year is 1962, and the famous blond is in a contractual contest with the studio that is facing financial ruin. When the studio’s marketing staff begin attacking her reputation and credibility with all their energy, Marilyn retaliates. Fearing the contest will end in court, she asks Heller to tap her phones, thus providing her with physical evidence to present to a judge.

Heller, now in his mid-50s and a highly successful entrepreneur with offices in New York, Chicago, and Hollywood, gladly accepts the job—unaware his client is deeply embroiled in a sex scandal that could rip the country apart.

Heller soon learns that Marilyn’s sexual escapades with Jack and Bobby Kennedy have attracted a hive of dangerous bees including the C.I.A., FBI, Teamsters President Jimmy Hoffa, and underworld figure Sam Giancana. All of them have a vested interest in keeping the blond bombshell quiet.

When she dies only a few months later of a drug overdose, the usually unflappable Heller is shocked by the inept police investigation that follows. It reeks of a cover up and Heller is convinced the depressed film actress was murdered. Now comes the tough part, proving it.

Bye Bye, Baby is the 15th Nate Heller mystery, Max Allan Collins’ longest running series and his most acclaimed. So meticulous is the research that goes into each book that one gets both a fast paced thriller and a history at the same time. Talk about more bang for your buck. Throughout the series, Heller has crossed paths with such personalities as Orson Welles, Frank Nitti, Sally Rand, and Charles Lindbergh. He’s very much the detective version of a Forrest Gump.

Yet in all these past cases he has never been more human or vulnerable. This is due in large part to the events taking place in a time writer Collins is personally familiar with, and it is that intimate connection that infuses itself into the character’s perceptions.

Norma Jean Baker, born June 1st, 1926, came to Hollywood as a model and became Marilyn Monroe. She landed her first film contract in 1946 and went on to become the most popular screen sex goddess since Jean Harlow. By 1953, she had progressed to leading roles and shaken off her “dumb blonde” image, winning the coveted Golden Globe Award in 1959 for her role in Some Like It Hot. The true circumstances of her death sparked an avalanche of conspiracy theories still bandied about today.

Mr. Collins’ genius is taking the dozens of convoluted records and few remaining pieces of evidence to describe one possible scenario on how Marilyn was murdered. In the end, the story is a gut wrenching tragedy and perhaps the author’s finest book ever. It is one this reviewer was emotionally involved with from beginning to end. I can remember all too easily being a 15-year-old fan overcome with sadness when Marilyn Monroe died. You see, Max, I loved her, too.