Griots: A Sword and Soul Anthology 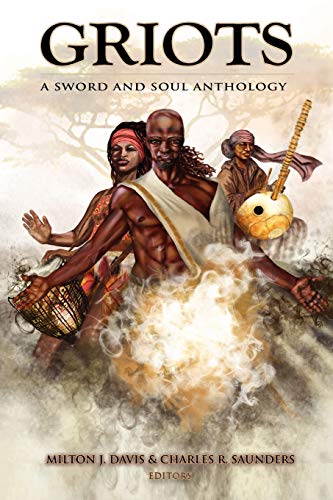 “Griots—French for African storytellers—collects 14 tales of exotic action and adventure all presented by African American writers. . . . a winning anthology unlike most of the fantasy found on today’s bookshelves.”

This reviewer has often made it known that he enjoys anthologies for two reasons: the first being the concept of similarly themed tales from various writers collected between two covers is just plain fun to read. The second is the continued publication of the short story format.

For many years academics were decrying the extinction of this form with the loss of so many monthly literary magazines, and they were right to do so. But thanks to the emergence of genre themed anthologies, the short story has truly enjoyed a healthy resurgence in popularity over the past decade.

Now comes this truly unique book which heralds the supposed creation of yet another fiction genre, that of “sword and soul.”

In the opening introduction, editors Davis and Saunders, both leading writers in the field of fantasy adventure, detail a history of the genre first established by pulp writer Robert E. Howard when he invented sword and sorcery with his well-known Conan adventures.

Whereas Mr. Saunders entered the field in the 1970s with the creation of his own barbaric warrior hero, Imaro, and later Mr. Davis followed suit, each has imbued this fantasy subgenre with what they believe is a clear African sensibility. Mr. Davis argues this is a new, original evolution of the well-established sword and sorcery theme. Are they correct, or simply trying to sell us something old with a new coat of paint?

As always, reviewing an anthology to determine its entertainment worth is pure mathematics. You simply count how many stories are in the volume and then during the course of reading label those that are exceptional, those which are simply mediocre, and those that are plainly lacking. In the end, whichever way the scales tip, you have your verdict.

Griots—French for African storytellers—collects 14 tales of exotic action and adventure all presented by African American writers. The following are my favorite six in this collection:

“Changeling” by Carole McDonnell, is the strongest of the bunch. It tells the story of three sisters and their fates in a poignant tale of human emotions, from the noble self-sacrificing nature of true love to the petty ugliness of greed and jealousy. Three princesses, each cast in a different mold, confront the meanings of their lives and their truths while resigning themselves to destiny, proving the old adage that a leopard can’t change its spots. McDonnell is a gifted writer, and she lays out her plot with words that mesmerize and paint images that remain long after the reading.

“The Three Faced One,” by Charles Saunders, was no surprise as my second favorite here with another great tale of the wandering warrior, Imaro, the hero of several of Mr. Saunders’ novels. This story finds Imaro coming to the aid of a tribe of cattle herders being taken abused by a three-faced demon. Once more, the powerful hero must pit his muscles against the forces of evil sorcery. This is pure Imaro gold—and worth the price of of the book by itself.

“Skin Magic” by P.Djeli Clark, is a gripping, original action piece about the victim of a dying sorcerer’s curse. A young thief must live with moving tattoos etched his chest that are actual portals to other worlds and the monsters that live there. How he comes to deal with this horrid fate is a very gripping and exciting entry.

Co-editor Milton Davis’s own “Captured Beauty” is the rollicking action tale of Changa, who despises slavery and risks his own position with his sympathetic employer to find a kidnapped maiden and rescue her from a cruel master who wields black magic.

Another winner is “The Demon in the Wall,” by Stafford L. Battle, featuring beautiful Makhulu and her warrior grandson Zende. Together they must rescue their captured family from the demoness Swallow and her human ally, the rich and fat Fabu. Together they are an unbeatable combination of sorcery and strength.

In “The Queen, The Demon and The Mercenary,” by Ronald T. Jones, Queen Zara’s land is besieged by an evil demon warrior and her salvation lies in the hands of an enigmatic mercenary with a cocky air of self-confidence.

These half dozen short stories are extremely well done and highly recommended. At the same time honorable mention goes to “Awakening” by Valjeanne Jeffers, “Lost Son” by Maurice Broaddus, “The General’s Daughter” by Anthony Kwamu, and “The Leopard Walks Alone,” by Melvin Carter.

The remaining four failed to impress me—one was so convoluted in its prose, it required rereading twice and still remained indecipherable. Overall, the scale weighs on the positive side: Griots is a winning anthology unlike most of the fantasy found on today’s bookshelves. Is it really a new genre? That’s for you to decide.