Fortunes of War (The Sentinels Book 1) 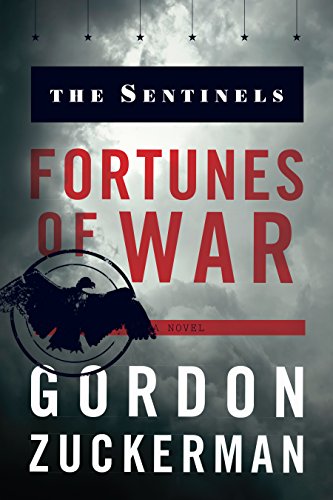 Having majored in Business Administration while in college, I know just how dry and boring subjects like Economics and Financing can be, which is why finding a modern day pulp thriller set in World War II and dealing with a group of young bankers out to save the world from fascism was a marvelous surprise. Even more so that it works extremely well.

In the early 30s a group of idealist young men and women, six in all, join forces at the University of Berkeley to hypothesize a new economic theory they call the Power Cycle. It is their idea that leading world industrialists are shaping social events and becoming the true powers behind international governments, including Germany. The six, all heirs to wealthy banking families, decide to become an economic watch group and call themselves the Sentinels. Their primary mission is to recognize large monetary shifts indicative of an emerging Power Cycles and then disrupt them using applied banking practices. Practices they tweak via illegal forgeries to stymie their opponents. This charismatic group is led by Frenchman Jacques Roth and American Mike Stone.

As the war wages in Europe, it comes as no surprise to the Sentinels when they discover that the same German Industrialists who helped manipulate the birth of the Third Reich, are attempting to funnel their personal wealth out of the country in order to ensure its safety should Germany lose. The implied threat to the Sentinels is all too real. By protecting their lucrative assets, these men could easily launch a new Reich from the ashes of the old. The Sentinels are not about to let that happen and begin devising a scheme to steal the money from them.

Part spy thriller, part social-economic dissertation, The Sentinels: Fortunes of War is a captivating new twist on the modern thriller. Not since Ian Fleming’s early James Bond books has there been such a deft handling of real world settings married to a group of derring-do heroes. The Sentinels are all well defined and make a great team. This is modern pulp at its finest, and I can’t wait for the next Sentinels adventure.