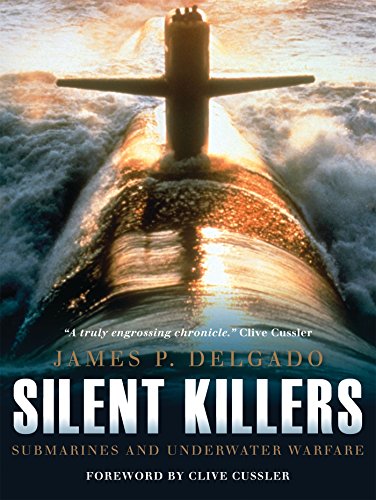 “The Silent Killers is a unique look back into an underwater realm few have ever seen. It is truly a remarkable work on all fronts.”

It is all too easy to be put off by a big, thick hardcover tome that details a particular historical theme; especially one the reader is not all that familiar with. Yet, since first reading Jules Verne’s Twenty Thousand Leagues Under the Sea, this reviewer has been fascinated with submarines.

Our big blue world is mostly covered by water, and most civilized cultures have sea-inspired myths that have shaped them throughout history. Upon diving, excuse the pun, into James P. Delgado’s book, I was immediately surprised to learn that man’s attempt to built an underwater seagoing vessel predates our own Revolutionary War. Then, by the time the Civil War rolled around, the Confederate Navy ship Hunley became the first submersible to sink an enemy ship: a Yankee frigate anchored in Charleston Harbor.

The Silent Killers abounds with such factual data, but more important are the intimate biographies of the inventors who built these often bizarre ships for myriad reasons—most of them noble and daring.

From the initial role of deepsea exploration to the eventual evolution into weapons of war, culminating in today’s massive nuclear powered submarines, these magnificent machines have inspired brave men and women in countless ways.

The irony is that the most prevalent use of undersea crafts today is once again exploring the depths of the world’s oceans to unravel her still many undiscovered wonders.

Filled with scores of archival photographs and schematics, The Silent Killers is a unique look back into an underwater realm few have ever seen. It is truly a remarkable work on all fronts.