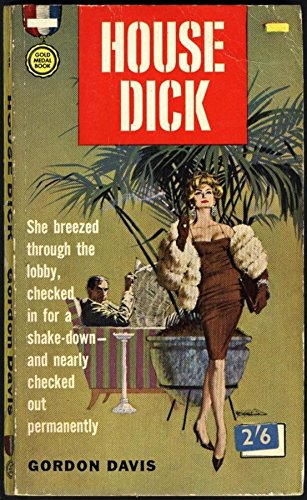 Long before professional spy E. Howard Hunt became famous as a member of Richard Nixon’s “plumbers,” he was a talented writer known for his mysteries and thrillers written under various pseudonyms.  In 1946 he won a Guggenheim Fellowship for his writing.  Hunt was one of the architects of the failed Bay of Pigs invasion of Castro’s communist Cuba and after that debacle, he and many of his colleagues, were relegated to minor desk jobs in the intelligence community. He later went to work for President Nixon as a security specialist, and along with G. Gordon Liddy and others, was one of a secret team charged with fixing “leaks.”  Hunt engineered the first Watergate burglary and in the follow-up Watergate Scandal, was convicted of burglary, conspiracy, and wiretapping—eventually serving 33 months in prison. House Dick was published in 1961 under the pen name Gordon Davis, and is set in a fancy Washington D. C. hotel (no, not that one).  When a rich woman’s jewels are stolen, it becomes Pete Novak’s job to handle the affair.  Novak is the hotel’s security manager.  When the woman’s husband convinces him there was no burglary and then later turns up dead in the room occupied by his mistress, matters quickly spiral out of control.  The case turns out to be a whole lot more complicated than Novak expected. Add to the mix a blond femme fatale up to her beautiful lips in a blackmail scheme, a violent mobster ex-husband just out of prison and wanting his cut, and soon things at the Tilden Hotel are really jumping. Yet Novak manages to keep one step ahead of events, as he manipulates both the police and the suspects until he can solve the mystery and return his life to a comfortable status quo.  Although not an exceptional work, House Dick is a competent example of the paperback thrillers that flooded the drugstore spin racks of the 1960s.  It remains an entertaining read from a writer whose real life exploits were far more interesting than any of his fiction.