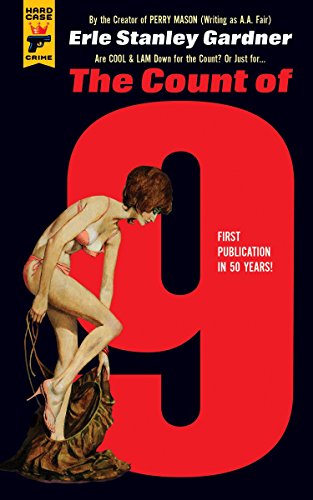 Erle Stanley Gardner was once one of the most popular and widely-read American authors. Almost everyone who spoke English knew his name. These days, Gardner is best remembered for his character Perry Mason. That is, if Gardner is remembered at all.

This is a shame, for Gardner was one heck of a writer. Sure, Gardner’s novels are formulaic, with tough-talking gumshoes, femmes fatale, and roughneck thugs with quick-thinking fists. All of these themes are present and accounted for in The County of 9, which was originally published way back in 1958. Written under the pseudonym “A. A. Fair,” The Count of 9 revolves around two of Gardner’s lesser known characters, the private eyes Bertha Cool and Donald Lam.

After one of his prized jade Buddhas is stolen, world traveler and playboy Dean Crockett hires Cool and Lam to make sure that his other Buddha remains safely at home. Things go awry during one of Crockett’s shindigs, and someone not only absconds with the second jade Buddha, but also steals a deadly blowgun and some poison-tipped arrows. The detectives are left with egg on their faces following this, and so too is Crockett, for he had installed in his home an elevator with an X-ray in order to expose the thief. Sadly for Crockett, he winds up dead a day later after taking a dart to the throat.

Lam takes the lead in the investigation. The small, impish, but brilliant detective soon discovers a jewelry heist and fencing operation at the heart of the matter, but in true hard-boiled fashion, Gardner leaves his audience guessing about the murderer’s identity until the last three pages.

Until that time, Lam nabs a nude model with slippery fingers, exposes her wealthy patron, and puts a real fear of the law into a sleazy pornographer. Lam also takes one serious pounding, which was mandatory in Garnder’s Cool and Lam novels.

The Count of 9 exudes mid-century American cool, with loads of snappy dialogue. The action is heavy in this pulp novel, and indeed action and dialogue more than make up for a rather pedestrian plot. There is no locked room mystery here nor labyrinthine blackmail scheme in the mold of Raymond Chandler. The Count of 9 deals with a prosaic crime with a predictable conclusion, but that does not matter.

What makes The Count of 9 so enjoyable is Gardner’s unadorned prose and the character of Lam. A smart-aleck everyman with nothing but bad luck, Lam is atypical of the hard-boiled genre. Neither a fighter or a lover, Lam in this book is much closer to a loser. However, this loser always wins in the end simply because he is a damn good detective.

The Count of 9 serves as a reminder (or an introduction) to Gardner’s seminal talents.