Sex, Love and DNA: What Molecular Biology Teaches Us About Being Human 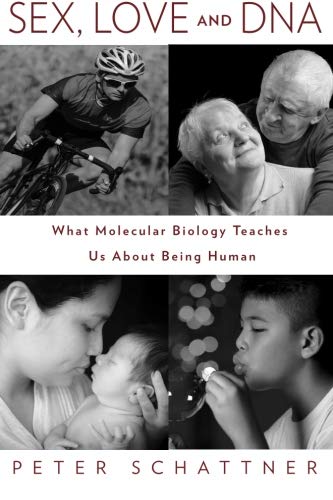 “Sex, Love and DNA is a wonderful introduction to genetics. Reading this book raises a feeling similar to watching one of those fascinating National Geographic specials—the one where you are so entertained, you do not realize you are learning.”

Sex, Love and DNA describes how genetics and the environment interact and how these interactions affect our life. Author of Sex, Love and DNA Peter Schattner says, “I believe that the ideas of modern biology are having a profound impact on our understanding of the natural world, and that, if clearly explained, these concepts are well within the grasp of the intellectually curious nonscientist.”

This book is an excellent popular science introduction to genetics. The author to his credit defines technical terms before he uses them. He tells a damn good story as well, starting with Steve Crohn, a gay man who was immune from AIDS, explaining how Crohn’s immunity was due to genetics.

The different shapes of amino acids lead to different functions, which may be illustrated through the human body’s internal signaling system. There are two types of receptors in the human body, ligands (hormones and neurotransmitters) and receptors. Receptors match ligands by their shape like a key matches a lock, bound by strong electrical attraction. Once a receptor is bound it changes its shape, and this triggers chemical or physical processes in the host cell, as for example, blood sugar in the human body is regulated by insulin from the pancreas.

AIDS is caused by the HIV virus. A virus is a microorganism that consists of a small amount of DNA or RNA surrounded by a protein envelope. The HIV virus attacks and destroys a specific type of white blood cell called the “helper T cell,” which are a critical part of our immune system.

How does any virus get inside a cell to destroy it? Cells have a protective outer membrane made of proteins, and the surface of the HIV virus is made of proteins that precisely bind with CCR5 receptor proteins that are found in the membrane of the helper T cell. One percent of people with European ancestry produce CCR5 with an altered amino acid, forcing the amino acid into an abnormal shape that makes it non-functioning. As the CCR5 protein is altered, HIV can’t bind to it. Inheriting a non-functioning amino acid saved Steve Crohn from AIDS. Discovering this connection, AIDS researchers began to search for drugs to block CCR5, and along the way began to understand the role CCR5 plays in the human immune system. Functioning CCR5 provides a defense against at least one disease, the West Nile virus.

DNA and RNA mentioned earlier are not proteins but nucleic acids. Nucleic acids have a long backbone of carbon, hydrogen, oxygen, and phosphorus atoms with small molecules called nucleotides attached. DNA is the cell’s “blueprint” that determines precisely what proteins each cell should make. DNA is constructed of four building blocks called nucleotide bases, made of adenine, cytosine, guanine, and thymine, or ACGT. The nucleotide bases are paired: A with T, C with G, and bound together in the form of a double helix.

The number of base pairs found in DNA can be in the millions or hundreds of millions in length. DNA is tightly packed and surrounded by proteins that protect it, called the chromosome. The number of chromosomes in a cell depend on the type of organism, though each cell’s number doesn’t correspond to how sophisticated that organism is. Humans have 46 chromosomes while turkeys, that paragon of intelligence, have 80.

The gene is a section of DNA that regulates itself to build a single protein. Genes and proteins are given abbreviated names like CCR5, and often the name used for both the gene and the protein it encodes. A gene is considered the unit of heredity, and each genome is a complete sequence of genes, which is different for all of us, even for identical twins.

There are differences, and then there are differences. Just one difference in a strand of DNA can lead to Huntington’s disease, and it takes just two differences to lead to cystic fibrosis or sickle cell anemia, though luckily for us many variations seem to have no biological effect at all.

Sex, Love and DNA contains a chapter on tracing your family history through analysis of DNA. To no surprise, this is a complicated thing to do, as there’s a mixing of DNA with every generation.

There are two special types of DNA that are not inherited in a complicated manner however, mitochondrial DNA and the Y chromosome. The Y chromosome is directly inherited from the father and can be used to trace the migration of genetically cohesive groups across the world; however, the Y chromosome can only provide information on a single ancestral lineage, which can lead to misleading conclusions—just one father outside a genetic group can skew the results

Mitochondrial DNA follows the female parent but is not specific enough to trace a person back to a particular “tribe” or geographic region as would be needed for example, to trace a descendant of the slave trade back to a specific region of Africa.

Sex, Love and DNA also contains a chapter on bringing extinct species back to life. A first look at resurrecting ancient proteins shows that this too is complicated.  Not all sequences of amino acids are biochemically active, and this causes a problem—there are too many possibilities to test. Instead, scientists start with ancient proteins they know and use them as starting points for experiments. Geneticists so far have brought one virus back from extinction, HERV-K.

On reading this, this reviewer’s concern was of the possibility of accidentally resurrecting a killer virus, like Ebola. The author assures us that all possible precautions are being taken, but given the recent foul-ups in the handling of patients with Ebola followed by the resignation of the head of the CDC, I have my doubts on the author’s assurances.

The reader may ask, what about cloning more complex multicellular organisms? Schattner explains that plants are easy and animals though challenging are indeed possible. The issues in reviving an extinct species include the same problems that exist for cloning extant species, for example, in cloning mice—only 1% to 2% of cloned mouse egg cells lead to a viable birth; that for any extinct species DNA degrades over time, and that any embryo will need a surrogate mother of a different species.

There’s a chapter on how scientists are beginning to unravel how genes affect our feelings of love and kindness. For the most part, scientists’ focus has been on non-human animals to provide clues on how genes affect humans. One experiment looked at different species of voles each having different natural behaviors, using the hormones oxytocin and vasopressin, closely related proteins used as signaling molecules, to study voles’ behavior.

Scientists discovered that different natural behaviors of the different species are related to DNA regulator regions of vasopressin receptor genes, thereupon the scientists were able to change the behavior of the two species by gene swapping. In a different experiment a similar effect was produced by the selective breeding of voles, which shouldn’t be so surprising considering that humans bred wild wolves into kind dogs a relatively short 15,000 to 30,000 years ago.

The chapter on sex is fascinating. There is a possibility for a human to have two X chromosomes and one Y, or one X and no Y. For some individuals, “physical examination may be unable to determine an intersex individual’s sex, or whether it is even meaningful to label them male or female.” The critical region of the Y chromosome that determines sex is the SRV gene and ten percent of cases of sex reversal are caused by an unusual variant of the SRV gene. The SRV gene can also move to the X chromosome, which is very rare, as approximately only 1 in 80,000 births result in an infertile male with no Y chromosome. Of the dozens of sex-differentiation proteins found by researchers in 2010, 50% of sex reversal causes remain unknown.

There is a chapter on epigenetics, that is, how the environment can change our chromosomes. Here Schattner asks more questions than he has answers to, including how do scientists disentangle environmental from genetic influence, and how can a scientist determine if a trait influenced by genetics at all? Often there are no obvious clues to determine inherited versus environmental influences and the scientist has to look at statistical ranges of an attribute’s presence.

There’s a lot more to Sex, Love and DNA. There’s a section on learning and memory where the author makes a very insightful aside that the intelligent don’t attempt to define intelligence. Despite this, there is a common measure of intelligence—the amount of time it takes to learn something. Intelligence as such is tested by problem solving and memory tests. The problem is there are hundreds of genes that affect problem solving and memory. Genetics studies that would be unethical on humans are adapted for animals, most commonly in the form of rats and mazes.

There are sections on diet and longevity, nature versus nurture, how chromosomes degrade and the relationship between chromosome degradation and the length of life. There’s a section on athletes, heredity factors, and the genes and hormones that affect endurance and strength. The last chapter addresses the limits of science and the need to separate questions on science from questions on morals and ethics, and argues for keeping a cautious, reasoned, slow approach to the science of genetics.

Sex, Love and DNA is a wonderful introduction to genetics. Reading this book raises a feeling similar to watching one of those fascinating National Geographic specials—the one where you are so entertained, you do not realize you are learning.