The World Is a Narrow Bridge 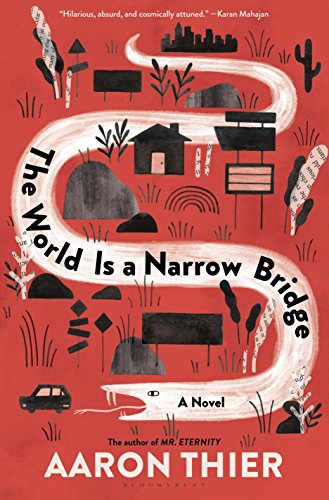 “a rambling, innovative, cerebral, and wildly entertaining ‘trippy’ journey that drives home essential questions while providing none of the answers . . .”

Indian novelist Amish Tripathi writes In The Oath of the Vayuputras “the purpose is not the destination but the journey itself. Only those who understand this simple truth can experience true happiness.”

For Miami millennial couple Eva and Murphy in Aaron Thier’s quirky The Road Is a Narrow Bridge, the journey better count, because there’s no damn destination in sight. And don’t expect to find true happiness, or even quasi-happiness, either, because in the Age of Trump that’s been discarded by the wayside as well.

Endearing secular humanists Eva and Murphy have been drifting untethered through life in a state of “moral unrest.” She’s a poet and an ESL teacher, he’s an occasional restaurant and movie reviewer for a local free paper.

Leaving the Whole Foods market one evening on what should be a 15-minute car ride back home, they instead embark on a cross country road trip in a poignant attempt to figure it all out. Good luck with that. They are guided, or perhaps forced into, this journey by frequent visits from Yahweh (the Old Testament Israelite God, the creator of the cosmos, the Lord of Hosts, the true God of all the world) and occasionally by Satan (who, truth be told, is not all that bad a guy).

Yahweh, often driving an orange Lamborghini, directs them to build Him a temple on a landfill in Florida which, given the threat of climate change and sea level rise (one of the many menaces Eva and Murphy are obsessed with), would be the only part of Florida left high and dry. But again, like most classic American road trip novels, screw the temple—it’s the journey that counts.

This is a laugh-out-loud novel (Eva is directed by Yahweh to show up at random events and publicly proclaim him God, awkward hilarity ensuing), but by no means should it be taken lightly or read quickly. It is a deeply intellectual, philosophical treatise on what it’s all about in such troubling times, with a good deal of focus on the nature of evil in the world.

Chapters are broken into sections, often no more than one or two paragraphs or a snatch of dialogue long, random meandering musings that often stand alone, independent of the rest of the book. Most of these work quite well, but not all of them. Some will leave even most erudite reader scratching their head, perplexed and confused as hell, much like Eva and Murphy.

Like most couples, Eva and Murphy’s “thoughts turn to the baby question” as they contemplate the possibility of parenting in an uncertain and increasingly frightening world where “the disasters of existence are what you experience if you are fortunate.”

Their writes “Tonight Eva argues that having a child under “these circumstances,” by which she probably means America’s toxic political situation as well as the temporary nature of their domestic and professional arrangements, is an “insane and hubristic thing to do,” but she goes on to say that having a baby is always an insane and hubristic thing to do, since it means introducing an innocent person to the perils and sorrows of the universe, which is to say, she says, shaking her head, that now is as good a time as any.”

“Remember when you got that stomach infection?” says Eva. “Remember how unhappy you were?”

“I thought it was a dairy allergy.”

“But the people at the doctor’s office were so nice about it. I remember that too.”

“You can’t count on that. All you can count on is the infection.”

And part of another: “Love versus God. She tips forward onto his chest and remains there, breathing and gripping her new socks, which are made from bamboo fiber. Life is what it is. Either you let the current sweep you out to sea or you swim against the current as it sweeps you out to sea.”

Gloomy as the above passages may seem to be, this is not a morose book. Far from it. It is oddly uplifting, prodding the reader to examine the uncertain nature of a perilous existence. There is, after all, hope in a world that is far from perfect, and Eva and Murphy are doing their damnedest to catch glimpses of it.

Want a plot driven novel where the destination is the focus and all is neatly resolved in the end? Don’t read this book, you will only be frustrated. Want a rambling, innovative, cerebral, and wildly entertaining “trippy” journey that drives home essential questions while providing none of the answers? Aaron Their’s The World Is a Narrow Bridge may be just what you’re looking for.