Impeach: The Case Against Donald Trump 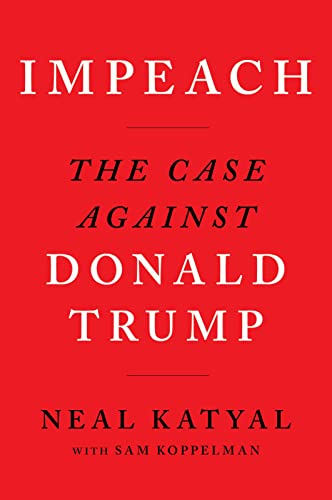 Neal Katyal makes an unimpeachable case, concise but comprehensive, for impeachment.  The author of Impeach knows the law and how to practice it. An attorney who has argued 39 cases before the Supreme Court, Neal Katyal was Acting Solicitor General for the United States in the Obama administration. He is also a law professor at George Washington University.

He goes to the heart of the matter by quoting today’s vice president, Michael Pence, when he served in the House of Representatives in 2008: “This business of high crimes and misdemeanors goes to the question of whether or not the person serving as President of the United States put their own interests, their personal interests, ahead of public service.”

This statement Katyal calls the “Pence Standard” and refers to it throughout the book. The author says he is not a partisan but an “extreme centrist”—determined to apply the same legal yardstick to every case regardless of its party connection. Though this book attacks a Republican president, Katyal earlier clerked for today’s Chief Justice, John Roberts, and supported Trump’s appointments of justices Neal Gorsuch and Brett Kavanaugh.

Katyal addresses some basic questions:  Why our founders (and Pence) would have impeached Trump. What high crimes and misdemeanors are and are not. Why we need to impeach Trump and why this is different from Mueller. Why we can’t wait until the next election. To understand what are impeachable offenses, Katyal reviews the impeachment cases of presidents Tyler, Johnson, Nixon, and Clinton.

Digging into the charges against Trump, Katyal examines the evidence that Trump accepted and sought information from a foreign government to help him against a political rival; that he withheld security assistance to Ukraine and then asked for a favor to release it. He reviews the July 25 phone conversation with President Zelensky, and observes that Trump never once discussed U.S. national interests or Ukraine’s war with Russia.

The anonymous whistleblower complaint against Trump, as Katyal reports, was not sent to Congress for weeks after it was submitted to the intelligence community inspector general on August 22. This aspect of the story takes Katyal back to 1777 when two naval officers reported that their commander had tortured British prisoners. When the two whistleblowers were fired, the Continental Congress compensated them and passed a whistleblower protection act.

Katyal himself defended a whistleblower who, after 9/11, complained that the government was reducing the number of TSA marshals on flights. The Supreme Court in an opinion by Chief Justice Roberts gave the whistleblower his life back.  President Trump, however, has demanded unmasking today’s whistleblower, calling him almost a “spy.”

This book is nothing if not up to date. Published in November 2019, it refers to many events and documents released as recently as September. To be sure, much of the material has already been in the public domain, but Katyal with his legal mind analyzes it in a novel way. For example: If the president really wanted Ukrainians to investigate a case, he would not demand that they announce their decision to do so, because this would tip off the suspects. Nor would the State Department budget to promote anticorruption in Ukraine have been cut from $30 to $13 million.

What will happen to the United States if Trump is or is not impeached? This question is addressed in Katyal’s final chapter. Civil strife, waged by militias, is one scenario. But impeachment could also open the door to a revival of what is best in the United States. Many could again become One.

Laws should be tightened to protect another Special Counsel and his/her findings. Katyal reviews the Mueller Report and finds that the Attorney General overstepped by stating that a president may not be criminally indicted. In fact, having studied the Mueller Report, Katyal counted at least 140 points of contact between Russians, WikiLeaks, and President Trump’s associates. Katyal recommends that Congress or the Justice Department institute new rules to prevent the executive branch from exempting itself from all supervision.

The president, according to Katyal, has committed impeachable offenses, but justice will not be served unless the American people demand that Sections 3 and 9 of the Constitution’s Article 1 are implemented. If Americans read this short book, they may do just that.

Recognizing that the impeachment process is a work in progress, the author puts existing and future relevant documents on www.nealkatyal.com.