All at Once: Prose Poems 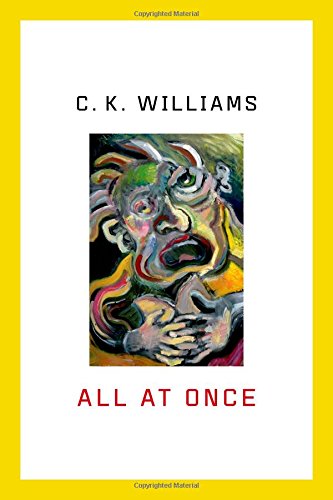 “It is probably not fair to compare C. K. Williams’ prose in All at Once with his award winning verse poetry books, but it does offer poetry averse readers an opportunity to engage with a perceptive and empathic wordsmith whose work they otherwise would not encounter.”

All at Once, C. K Williams' new book of short prose pieces, is being marketed as a book of prose poems, but it might be more accurate to refer to these very short prose works as short shorts; some are prose poems, others are short personal essays, and a one or two are flash fiction. None are longer than four pages, and some consist of but a single four-line paragraph.

Several shorter pieces employ prose that is poetic but not purple, while some of the longer ones are similar to the personal essays the New York Times Sunday Magazine publishes on its last page, and still others are a tad more literary than op-ed essays but not quite belles lettres. Most are autobiographical, and all address various aspects of the human condition.

"Bird" is an example of a piece that packs painterly description into a short single sentence paragraph:

"What possibly could it be, that flash of not quite blood red but a more luminous Brueghel crimson, then a banner of Ghirlandaio sunflower yellow that whenever this morning I hear a bird cry in the yard and go to the window darts off before I can tell anything more than it's been there, leaving me straining my eyes and trying to imagine what possible evolutionary choices could arrive at such a seductive triumph of color, like two jets of paint on a palette, and why."

Williams also uses a stream of consciousness style in his five-paragraph piece "I Kept Changing My Mind." In the middle paragraph he employs the self-accusatory tone typical of his verse poetry. (His most recent book of verse, Wait, is also reviewed on NYJB):

"I kept changing my mind, suspecting all along that I'd be accused of vacillation and weakheartedness, and so accusing myself of vacillation and weakheartedness and of indolence, which Kafka said was impatience, but I could never bring myself to believe him, impatience being perhaps the only virtue I believed in, and I wasn't accustomed to accusing myself of virtues, only of what I needed to go on with this uncertain project of mind-changing, misunderstanding, incomprehensible misapprehensions on which I staked my life but in such undemanding ways, not having been put to the torture for it or the flame for it or death for it, so how could I accept, how could I even let myself pride myself for one moment on having survived it."

Likewise in "Advice" Williams recalls not picking up the signs that an acquaintance was severely depressed and recognizing them only in hindsight after the man's suicide. Williams' verse poetry is known for his expressions of conscience both personally and collectively, and that is also in evidence in All at Once. "Bombs" concerns the nuclear age and concludes:

"The chilling obeisance we felt beholding the bomb had fear in it, yes, but also exaltation, our realization beyond any mode of analysis that our devising of such a spectacle, however vile, was triumph, not defeat."

So too in "The Bully" Williams describes how a bully's

"incipient violence would become a shelter, in which you believed you could participate without complicity.

". . . It would come to you later on that you'd shamed yourself before yourself--it was like pissing in your pants.

"One day, too, you'd realize a nation, too, your own nation, could be like that, and it too would make you feel you'd pissed yourself, or worse."

The shortest piece in the book, "Apollo or Dionysis" consists of eight words not counting the title:

Reminiscent of the light verse in Norman Mailer's Deaths for the Ladies, "Apollo or Dionysis" follows "Another Disturbing Death," a four page piece about a different suicide than the one in "Advice," and perhaps is meant to provide comic relief. In “Gods Etc” Williams wonders “what . . . would Jesus have thought of Catullus?”

The book is divided into three sections, All at Once, Catherine's Laughter, and All at Once Again. The first and last sections are quite varied and include references to the many women in Williams' love life prior to his current marriage. In "And I Never" Williams wonders what a former lover he last saw when she was twenty would look like at seventy; would he really want to know? Yes, he would.

The middle section consists of lovely and endearing appreciations of his current wife Catherine with whom he has been monogamous in contrast to his earlier lifestyle. Catherine is French and spent part of her childhood under German occupation. In "Dogs" Williams wonders what would have happened to her had she been Jewish.

Other shorts include “Kahn,” a reminiscence of architect Louis Kahn who was a friend, and various slice of life narratives, some from Williams’ perspective as a senior citizen. In “Meetings” Williams describes attending an academic conference where he feels behind the times and has dismissively disparaging things to say about Deconstructionism and Language poets.

Throughout the book Williams seeks a sense of connection. In “Late” Williams describes a domestic scene at the end of dinner in which while feeding his dog table scraps his gaze falls on a person in a photograph who has been dead many years and whose eyes seem to be saying,

Let me be more vivid in you, please, be in firmer union with you, otherwise the life I almost have again within you might not be complete, but like the dog’s might always lack, always need, not your pity, but something you can’t give, which lasts as long, and burns as much. [Williams’ italics]

It is probably not fair to compare C. K. Williams’ prose in All at Once with his award winning verse poetry books, but it does offer poetry averse readers an opportunity to engage with a perceptive and empathic wordsmith whose work they otherwise would not encounter.