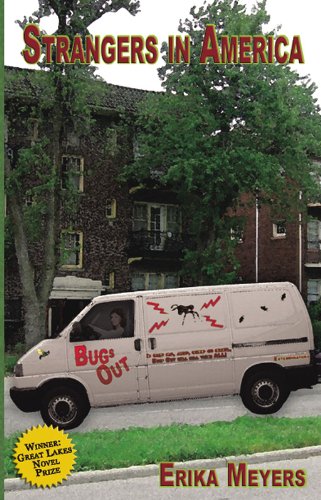 Erika Meyer sure found an unusual focal point for her novel Strangers in America. It may be the only piece of fiction ever written about an exterminator—in this case, 28-year-old Helena Adamzik, the adopted daughter of a Polish-American family in Ohio, whose main goal in life seems to be to get promoted from part-time to full-time so that she can earn enough to pay her rent and repair her car That’s not a bad start. It could, for instance, branch out to a Dickensian panorama of homes viewed at baseboard-level, bringing readers to a world they’ve never seen before. Meyers provides lots of information about where ants gather and how to catch groundhogs. (Groundhogs can be lured with lettuce, but wear gloves when you place the lettuce in the trap, to avoid leaving a human scent.) The problem is that the book tells more about groundhogs than about Helena. Let’s see: Helena is five-foot-four with brown eyes and hair. She recently broke up with her boyfriend. She used to be a journalist. She counts the number of steps (43) “through the kitchen to the bathroom” of her house and notices that a chair has been moved “15 centimeters from how I first placed it.” When she picks up her father from the airport, they drive home mostly in silence. And . . . ? Now, this sort of style—a piling-up of facts and actions, related in a toneless, first-person voice—can actually reveal a lot about a character, if written well.  Readers have the fun of piecing together subtle clues. For example: A co-worker hands Helena a cigarette—aha! That means she smokes, which means she’s not obsessively health-conscious, but also not too embarrassed to smoke in public. At the opposite extreme, books can suffer from too much explanation. It’s not necessary to have an Olympian narrator take the reader by the hand and say, “Helena is obsessive about keeping her belongings in certain ways” or “Helena is angry with her father for nagging her to get a new car.” But there aren’t enough facts about Helena, enough clues for the reader to put together a portrait or enough flesh and blood to care. One reason is that there just aren’t enough words at all; the book—which won the Great Lakes Novel Prize co-sponsored by the publisher—is only 134 pages long.  Some of the tonelessly told scenes, moreover, are simply unbelievable. This obsessive centimeter-counter has no reaction when she finally discovers the intruder who has been moving her belongings? (For that matter, the revelation of the intruder is forced and out of context.) There also seem to be a few leftover clues, maybe because Meyers ran out of pages. Why does Helena’s mother raise the question of searching for Helena’s birth parents, only for that topic to be promptly dropped? Was that just a way to let the reader know Helena is adopted? But why even bother, since being adopted doesn’t seem to affect her attitude toward anything? Ultimately, Strangers in America is a wasted opportunity. The literary world needs more novels about exterminators and other working-class people like Helena, but the need is not urgent enough for readers to pick up this book. In her next book, Meyers should take her time. Reviewer Fran Hawthorne is the author of The Overloaded Liberal (Beacon Press, April 2010), which, among other topics, analyzes why liberal consumer activists don’t usually pay attention to unions and working conditions in the U.S.