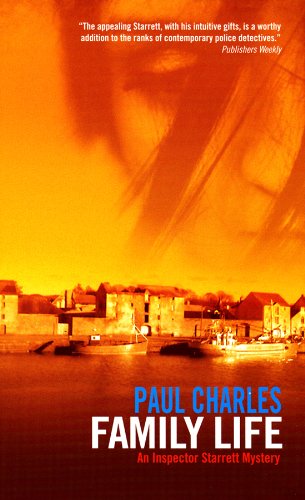 Family Life is the second of the Inspector Starrett mysteries set in the town of Ramelton in County Donegal. Dangerously close to Brian McGilloway’s stomping ground, but there’s room enough for both of them, thanks to the diversity in styles. Family Life kicks off with the murder of a young farmer by the name of Joe Sweeny, by all accounts, a downright decent bloke who played well with others. His body is discovered on the day of Liam Sweeny’s 64th birthday. Liam is the patriarch of the Sweeny clan. The immediate family extends to Liam’s wife Collette, two more sons, Tom and Ryan, and a daughter, Teresa. All have returned back to the Sweeny farm to celebrate Liam’s birthday with their significant others in tow. It comes to light very early on that almost every guest at the party has a motive for the murder related to Joe’s place in Liam’s will. And so Starrett, though mildly depressed by the prospect, has no choice but to start his investigation with the dead man’s immediate family. As the plot develops, so does a rather interesting study into the dynamics of family life that extends beyond the Sweeny clan and gives the thoroughly introspective Starrett food for thought. His own personal situation is far from perfect due to the fact that he spent his early years running from a vocational mistake he made as a teenager. Now, well into his forties and with romantic notions for his childhood sweetheart, he has the urge to overcome his emotional awkwardness and achieve the sense of ”belonging” he equates with family. There are some surprising flashes of humor in Charles’ writing, considering the dark premise of a murder in which those closest to the victim are suspected. They caught this reviewer off guard from time to time, but served to keep interest in the book high at points where it began to feel like just one interview after another. Charles achieves the admirable task of keeping the reader involved in the slower side of police work. He goes with old-fashioned detection over gunfights and body counts. Charles’ background as a music promoter infuses the book with lots of great references to the industry. But he keeps them subtle and in line with the story, which is not to be sniffed at. The temptation to show off his personal knowledge (and detract from his characters in the process) would be hard to resist. If Starrett ever makes it onto the screen, Charles should definitely be drafted in to work on the soundtrack. Family Life is a clever work of detective fiction set against a homely background that seems to magnify the brutality of a serious crime like murder. And there’s more Inspector Starrett to come. I have it on good authority that this series will form a trilogy at the very least. After that . . . we can but hope.