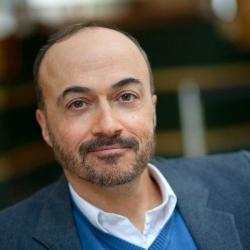 Robert Fantina is an author, journalist, and activist working for peace and social justice. He writes extensively about the oppression of the Palestinians by Israel.

He is the author of several books, including Desertion and the American Soldier: 1776–2006; Empire, Racism and Genocide: A History of U.S. Foreign Policy; Look Not Unto the Morrow, and Occupied Palestine: Israel, the U.S. and International Law.

Also a public speaker, he has spoken about U.S. imperialism multiple times at events in Washington, D.C. He has also spoken on imperialism and human rights at conferences in Ireland, and Iran.

Empire, Racism and Genocide: A History of U.S. Foreign Policy

Look Not unto the Morrow

Healing Politics: A Doctor’s Journey into the Heart of Our Political Epidemic

“Healing Politics is a book for today, a roadmap for moving the United States out of its male, white-privileged status to one where there is, in fact and not just theory, equal opp

“With the ever-increasing numbers of poor adults and children in the United States, and current government efforts to further decrease benefits for them, this is an extremely timely book.”

We Speak for Ourselves: A Word from Forgotten Black America

The rise of Barack Obama to the office of the presidency in 2008 heralded, to the talking heads whose pronouncements much of the populace uses to form its opinions, the final indication that racism

Iran Rising: The Survival and Future of the Islamic Republic

“Iran Rising: The Survival and Future of the Islamic Republic is a clearly written, well-researched, and scholarly work that will be of benefit to anyone with a ge

Preventing Palestine: A Political History from Camp David to Oslo

“for anyone interested in understanding the shocking manner in which the rights of the Palestinians, along with international law, have been violated for decades, all with U.S.

History Teaches Us to Resist: How Progressive Movements Have Succeeded in Challenging Times

“well researched and well written, chronicling some of the major protest successes and failures of the last 70 years.”

"Deport, Deprive, Extradite: 21st Century State Extremism is an excellent resource to gain knowledge of the unjust reality of the U.S. war on terror . . ."

“reading [this book] should motivate many to take action to end the practices exposed therein.”

In Algorithms of Oppression, Safiya Umoja Noble clearly explains how search engines, used by billions daily, are not an innocent, neutral vehicle by which to search for information.

The Pentagon's Wars: The Military's Undeclared War Against America's Presidents

Russia's Dead End: An Insider's Testimony from Gorbachev to Putin

“ Whether one is pro- or anti-Russia, or supports or disdains Putin, this book will be a fascinating read.”

“Have Black Lives Ever Mattered? is powerful, disturbing, well-written, and an important book for our day.”

Democracy in Chains: The Deep History of the Radical Right's Stealth Plan for America

"This is a book for everyone who has ever questioned the validity of the “war on drugs,” the “war on poverty,” or any other governmental attempt to solve social ills . . ."