History Teaches Us to Resist: How Progressive Movements Have Succeeded in Challenging Times 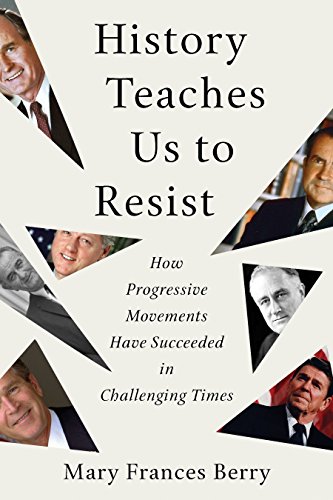 “well researched and well written, chronicling some of the major protest successes and failures of the last 70 years.”

We live in a society where, increasingly, it seems that government officials are not responsive to the wishes of the people who elect them, and who they govern. The 1% seems to be in control, leaving the 99% with nothing to do but follow along.

In History Teaches Us to Resist: How Progressive Movements Have Succeeded in Challenging Times, Mary Frances Berry explains how, since at least the administration of Franklin D. Roosevelt, the populace has needed to make itself heard outside of the ballot box. And she demonstrates how, with ever greater efficiency, the government fights back against opposition to its policies.

As the former chair of the U.S. Commission on Civil Rights, serving under more than one presidential administration, Berry has had a ringside seat to the efforts to roll back the hard fought gains of minority populations in the U.S.

She quotes civil rights leader A. Phillip Randolph (1889–1979): “The future of the Negro depends entirely upon his own action and the individual cannot act alone.”  She adds: “Group organization and protest could defeat racial inequality.” Yet it isn’t only civil rights in the U.S. that draws her attention.

Berry’s time in Vietnam in the summer of 1967 crystalized her understanding of soldier opposition to that war. With increasing numbers of people demonstrating against U.S. involvement in Vietnam, “the [Nixon] administration gave the media talking points and bogus information in order to define the protesters as radicals.” But once the Pentagon Papers were released, they “showed the racist, imperialist nature of the war just as the antiwar movement had repeatedly pointed out.” Government efforts to discredit war resisters failed spectacularly, when the government’s own, secret documents verified their claims.

Opposition to the apartheid regime of South Africa was strong around the world, and it’s unlikely that that racist practice would have ended with international protest.

Activists during the Reagan administration demanded lower-cost drugs for the treatment of AIDS and expanded services. Some of these goals were realized. Yet the increasingly deaf ear that the government turns to the people cannot be ignored.

Protests against the outcome of the 2000 election, in which Vice President Al Gore won the popular vote, but George Bush, under questionable circumstances, won the Electoral College vote, had no positive result. Protest against the invasion of Iraq were equally ineffectual.

For example, as Berry points out, on February 16, 2003, “According to the BBC, between six and eleven million people took part in protests (against the Iraq War) in up to sixty countries . . .” Other estimates range as high as 30 million. According to CBS news, protests occurred in at 150 U.S. cities, including Chicago, New York and Los Angeles. None of this prevented that disastrous, illegal and tragic war.

Halfway through the first term of President Donald Trump, the world has witnessed some successes in protests. As Congress worked to keep its promise of eliminating health care for millions of people, this action “ignited protests at town hall meetings and elsewhere in the early months of his presidency.”

Similarly, “[H]is executive order calling for a moratorium on refugees and entry of immigrants from certain Muslim-majority countries generated litigation and protests at airports and other places.” Trump pulled back, following these actions and the decisions of some courts, which voided all or part of the executive order.

Berry concludes with some advice, particularly about the use of social media as a tool for keeping like-minded people informed about issues of concern, and protests about those issues. Yet she also calls out the downside of social media, which makes “it easier for authorities to conduct surveillance and spread disinformation to disrupt protest.” She also cautions against the tendency of some to allow their use of Twitter, Facebook, and other social media sites to be the total extent of their protests. Disruption, she says, “along with strategic organizing and education about the issues, produces change.”

For those who are understandably discouraged about the state of the nation today, about increasing racism, sexism, homophobia and Islamophobia, issues once relegated to a fringe, mostly discounted majority, but now taking center stage and being brought to an unprecedented level of respectability, History Teaches Us to Resist: How Progressive Movements Have Succeeded in Challenging Times offers advice and encouragement.

As indicated herein, not all protests succeed, but the organizing for one issue can have positive impacts on others; positive associations between diverse but related groups can assist each of them.

History Teaches Us to Resist: How Progressive Movements Have Succeeded in Challenging Times is well researched and well written, chronicling some of the major protest successes and failures of the last 70 years. It is well-worth reading.