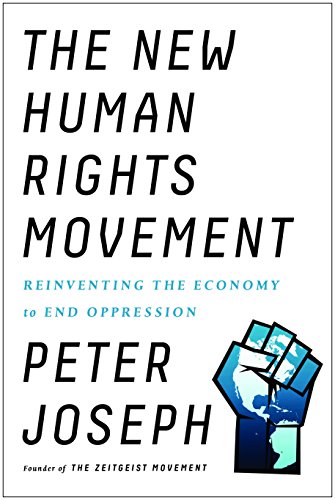 "This is a book for everyone who has ever questioned the validity of the “war on drugs,” the “war on poverty,” or any other governmental attempt to solve social ills . . ."

Despite the efforts of governments, NGOs, religious groups, and other organizations to alleviate the problems of crime, poverty and myriad other social ills, they remain with us, growing rather than decreasing. Countless billions of dollars have been spent, with minimal, if any, results.

In The New Human Rights Movement: Reinventing the Economy to End Oppression, Peter Joseph offers a revolutionary and thought-provoking explanation of why this is. Simply put, these social problems cannot be solved until the underlying systemic issues that cause them are first recognized, and then addressed, but doing so is not in the interests of the world’s movers and shakers.

In this book, the true nature of the capitalist system, which rewards the rich as it penalizes the poor and working class, is described in clear and surprising detail. The artificial creation of money, which again benefits only those who control it, is explained. The propaganda efforts of those in control, to convince the populace of the glory of the “free market,” to its own detriment, is described.

As Joseph explains with well-researched and carefully documented facts this is not a new phenomenon. Rather it dates back to the so-called Neolithic Revolution, the transition from a society of nomadic hunter-gatherers to agricultural pursuits and permanent settlements. It was with this social transition that the class system as we know it today was born.

Because the tradition of capitalism and the general acceptance of separate “have” and “have not” populations are concepts that have become so ingrained, they are seldom questioned. In this book Joseph questions them and arrives at surprising conclusions.

Using historical facts and the writing of economists and philosophers, Mr. Joseph brings the reader logically through the numerous connections of capitalism, foundational to so many social evils, to racism, classism, war, crime, poverty, alienation, depression, etc.

This is a book for everyone who has ever questioned the validity of the “war on drugs,” the “war on poverty,” or any other governmental attempt to solve social ills, and wondered why, with so much time and money spent on these “wars,” drug use levels remain constant, poverty levels increase, inner-city crime continues, imperial wars expand, and whatever other targeted ill supposedly addressed does not end.

The author explains that ending these problems is not in the interest of capitalism; for-profit prisons need more prisoners, the poor need to stay poor so they will work for low wages, and weapons manufacturers need war so their products can be sold to governments around the world, profiting the few at the expense of the many.

Joseph, the founder and president of the Zeitgeist Movement, is not a prophet of doom; while clearly enunciating the many challenges of modern life, most of which have their foundations in philosophies thousands of years old, he offers specific steps that can be taken to alleviate all the problems that capitalism creates.

The New Human Rights Movement: Reinventing the Economy to End Oppression, is a book for our time, and one that should be required reading in every university in the first world. Students, possibly for the first time, will need to question so many of the assumptions with which they have grown up. Doing so will enable future leaders to break out of the traditional roles that clearly don’t work.

Third World university students will also benefit, as they learn about the foundations of the systems that have relegated their nations to poverty. They may know from sad experience that foreign aid always comes with strings attached, strings that, when followed, have a noose at the end. This book explains why that is, and how it can be changed.

This book is a fascinating read, and a vitally important one for anyone who is tired of the status quo, seeks to understand why it is so entrenched, and wants to do something about it.