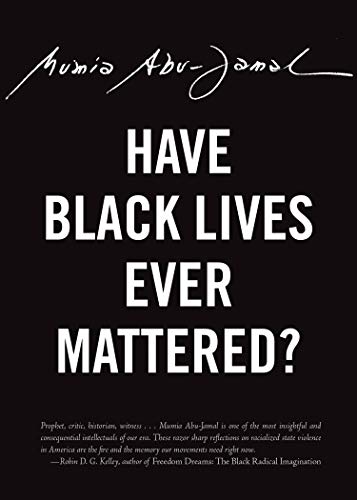 “Have Black Lives Ever Mattered? is powerful, disturbing, well-written, and an important book for our day.”

With the recent acquittal of two more police officers in the deaths of unarmed black men, the question posed by the title of this book is as relevant as it ever was. Through a series of concise, clear essays, Mumia Abu-Jamal details the racism against blacks, comparing today’s behaviors with the lynchings that were common in the south prior to the decade of the sixties. He points out the obvious: The passage of Civil Rights legislation hasn’t changed much; it simply changed the way racism operates.

The ways in which the white establishment has worked to oppress blacks is astounding. After the Civil War, when slavery was no longer legal, “whites realized that the combination of trumped-up legal charges and forced labor as punishment created both a desirable business proposition and an incredibly effective tool for intimidating rank-and-file emancipated African Americans and doing away with their most effective leaders.”

Abu-Jamal states that, today, “where once whites killed and terrorized from beneath a KKK hood, now they now did so openly from behind a little badge.” He details the killing of black men and women in the U.S. with almost complete impunity.

There are two related issues Abu-Jamal discusses. The first is the rampant racism that enables the police to kill unarmed blacks, as young as 12 years old, for no reason, and the second is the “justice” system that allows them to get away with it.

One shocking crime, amid countless others, occurred in Cleveland, Ohio. In 2012; a police officer was acquitted in the deaths of two, unarmed blacks, after leaping onto the hood of their car and firing 15 rounds from his semi-automatic rifle into the car’s occupants. That is 137 shots, at point blank range, into the bodies of two unarmed people.

If this were an anomaly, it would be barbaric, but it is not: it is common practice for the police to kill unarmed blacks, and, on the rare occasions that they are charged with a crime, for the judges and juries to acquit them.

In the U.S., black citizens are disproportionally imprisoned. With for-profit prisons on the rise, this injustice will only increase.

Abu-Jamal relates story after story with the same plot, and only the names are different. An unarmed black man is stopped by the police for any of a variety of reasons ranging from trivial (broken tail light), to more significant (suspect in a robbery). But too often, the outcome is the same: the black man is dead and the police officer who killed him, more often than not white, is either not charged, or acquitted after being charged.

The Black Lives Matter movement formed to combat this blatant injustice, but it will be an uphill battle. As Abu-Jamal says, “police serve the ownership and wealth classes of their societies, not the middling or impoverished people. For the latter, it is quite the reverse.” As a result, people of color suffer disproportionately, too often winding up on the wrong side of a gun.

What is to be done? Abu-Jamal refers to the writings of Dr. Huey P. Newton, who calls not for community policing, but for community control of the police. Abu-Jamal argues forcefully for a new movement, “driven by commitment, ethics, intelligence, solidarity, and passions; for without passion, the embers may dim and die.”

Have Black Lives Ever Mattered? is powerful, disturbing, well-written, and an important book for our day.