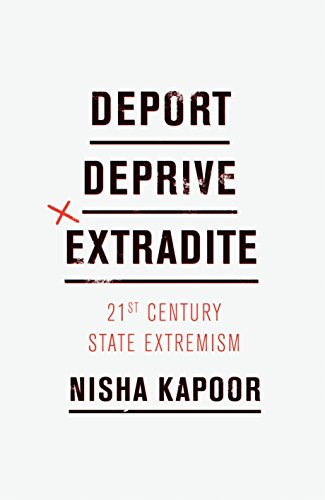 "Deport, Deprive, Extradite: 21st Century State Extremism is an excellent resource to gain knowledge of the unjust reality of the U.S. war on terror . . ."

As part of the United States government’s never-ending war on terror, it has established agreements with other countries to enable the easy transfer of terror suspects to the U.S. In Deport, Deprive, Extradite: 21st Century State Extremism, Nisha Kapoor describes not only the questionable legal status of inter-country extradition, but also the unspeakable suffering it causes to so many innocent people.

These policies, says Kapoor, have their root in racism, and, in repeated examples, she demonstrates the truth of that position. “[M]otivations for terrorist violence are attributed to essentialised and orientalist notions that equate Islam or some factions of it with barbarism, irrationality and, in general terms, pre-modernity.”

This, she says, reduces “the complexity of vastly different civilisations of the East to pathological tendencies towards savagery, misogyny and despotism.” Such ideas render these “suspects” somehow non-human.

“Turbaned, bearded men and burqa-covered women have, through political and media discourse, come to signify and represent the terrorism suspect. As these images circulate ever more intensely, an acute visual and affective sense of Muslim non-humanity has become concretised. . . .”

The legality of the ability of England, the focus of this book, to turn over suspected terrorists on the flimsiest of evidence is questioned throughout the book.

“Suspects” in the United Kingdom who are extradited to the U.S. are often never charged with a crime in England. For example, Fahad Hashmi, a U.S. citizen studying in Britain, after being brutalized by British police, was extradited to the U.S., although “the entire case against him concerned events that had taken place in Britain.” Indeed, the European Court of Human Rights has caused some, but not nearly all, of the most egregious of such violations to be prevented, but it has allowed many others to stand.

The violation of basic human rights starts at the moment of the interaction with the police before any arrest is made. Police often bomb open the front doors of the homes of these suspects, brutalize them, ransack their home, and then drag them off either to arrest, or to a plane to take them directly to the U.S.

Ahmad Babar was one man so victimized. Following his arrest in England, he filed a suit to compel an admission of wrongdoing by the Metropolitan police. “Photographs of his injuries, medical reports and expert opinions documenting the assault (when he was arrested) provided evidence to support his case. A report by an accident and emergency consultant physician, Mr. Manolis Gavalas, noted that there was ‘clearly unequivocal evidence that he was subjected to harrowing physical and psychological assault.’”

Kapoor relates the tragic story of one young man so victimized, arrested under the weakest evidence, who was eventually sentenced to 40 years in a U.S. prison.

This is the U.S. war on terror. It is based on racism, fed by fear, disdains due process, and has involved many other nations in its barbaric practices.

What is to be done? When the U.S., with its ever-increasing military budget and its many wars around the globe, runs roughshod over human rights at home and abroad, and co-opts other nations in joining it in its crimes, how can progress toward overturning these grave injustices be made?

Kapoor closes her excellent, informative, and thought-provoking book with a quotation from Sri Lankan novelist Ambalavaner Sivanandan. “The function of knowledge is to liberate, to apprehend reality in order to change it.”

Deport, Deprive, Extradite: 21st Century State Extremism is an excellent resource to gain knowledge of the unjust reality of the U.S. war on terror, which will hopefully lead to positive change.