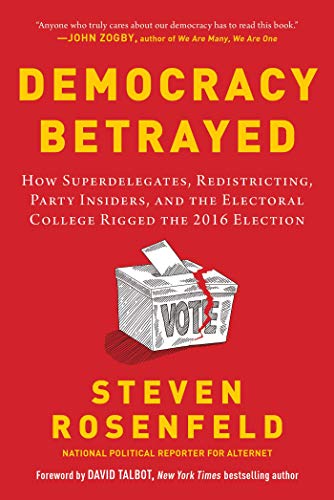 “reading [this book] should motivate many to take action to end the practices exposed therein.”

United States government officials often proclaim that the democracy of the U.S. is the envy of the world, a model for others to follow and a beacon of hope to one and all. In Democracy Betrayed: How Superdelegates, Redistricting, Party Insiders, and the Electoral College Rigged the 2016 Election, Stephen Rosenfeld successfully shatters these myths.

One focus of this well-researched book is redistricting, the means whereby the Republican Party has been able to sufficiently divide potential Democratic voters, often minorities, within mostly-GOP districts to ensure GOP electoral success. This explains the bizarre phenomenon of states in which Democrats receive the greater number of votes, but Republicans win the greater number of seats in the House of Representatives or the state legislature.

Despite the Voting Rights Act, Republican state legislators continue to pass laws that make voting more and more difficult for minority voters. Said Rosenfeld: “the (Republican) Party has been pushing and passing scores of state laws that further erode Democratic voting blocs at key steps in the voting process.”

This includes purging voters from the rolls who have not voted in the two most recent elections, and unreasonable photo ID requirements. For example, Texas and Wisconsin both passed laws for photo ID that excluded university IDs, but in Texas, a state handgun license was sufficient. Students tend to support the Democratic Party, while gun owners are more often Republican.

Yet, as Rosenfeld points out, the Democrats are not innocent bystanders, playing by the rules and victimized by the cunning activities of the rival party. The most recent and egregious example of their own nefarious deeds occurred in 2016, when the campaign of Vermont Senator Bernie Sanders was sabotaged in favor of the “anointed one,” Hillary Clinton. By using Superdelegates (party bigwigs who were beholden to Clinton to swamp the delegate count), scheduling debates between Sanders and Clinton at times inconvenient for many viewers, and using Democratic National Committee Chair Debbie Wasserman Schultz as a surrogate for the Clinton campaign, the Democratic (in name only) Party betrayed its own adherents.

Finally, the bizarre Electoral College is conveniently used by the GOP. Only once since the 1988 election of George H. W. Bush has the Republican Party gained a majority (that was when George W. Bush was “re-elected” in 2004), yet George W. Bush and Donald Trump have become president despite losing the popular vote. Bush lost to Vice President Al Gore by half a million votes; Trump to Clinton by nearly 3,000,000. How in a democracy this is allowed is incomprehensible.

Immediately following the 2016 presidential election, attempts were made to question the legitimacy of some Electoral College votes. Massachusetts Rep. James McGovern objected to “the certificate from the state of Alabama on the grounds that the electoral votes were not under all of the known circumstances regularly given and the electors were not lawfully certified. . . .”

Vice President Joe Biden, who was presiding, asked this procedural question. “Is the objection in writing and signed not only by a Member of the House but also by a Senator?” Since no senator had signed it, Biden said that “the objection cannot be entertained.” At least six other members of the house raised objections, and California’s Maxine Waters then spoke: “I wish to ask: is there one United States Senator who will join me in the letter of objection?” None responded.

This, according to Rosenfeld, is all by plan, which starts with assuring that state legislatures are in Republican hands, where redistricting and voter suppression laws can be achieved. From there, the national party benefits, at the expense of the will of the people.

Only education and citizen participation can end these practices and bring something resembling some form of democracy to the United States. A key aspect of that education is Rosenfeld’s book, Democracy Betrayed its reading should motivate many to take action to end the practices exposed therein.