Preventing Palestine: A Political History from Camp David to Oslo 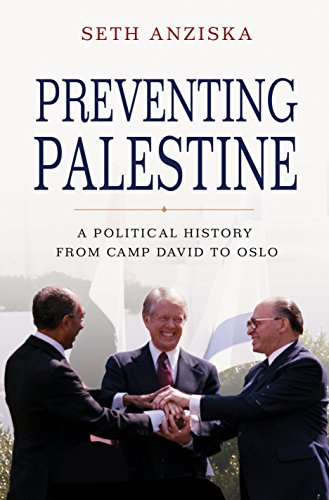 “for anyone interested in understanding the shocking manner in which the rights of the Palestinians, along with international law, have been violated for decades, all with U.S. complicity.”

With the administration of U.S. President Donald Trump, the mask of U.S. neutrality in the Israel-Palestine conflict has been removed; Trump’s pro-Israel bias cannot be mistaken. Yet he has only displayed what several U.S. administrations have long practiced: Israel is to get whatever it wants, regardless of what it means to Palestinian human rights or international law. In Preventing Palestine: A Political History from Camp David to Oslo, Seth Anziska clearly documents the facts that prove this.

During the Carter administration, President Carter presided over the Camp David Accords, and saw it as a signature achievement of his presidency. “For the Palestinians, Camp David was a crucial moment of state prevention. It marked the first instance of post-1948 discussion of their plight on a global scale, yet excluded them from the negotiations that would decide their political fate.” This was a pattern that would follow, in one form or another, to the present day.

The intransigence of Israel is clearly demonstrated. When, in 1977, the U.S. and the Soviet Union issued a joint communique prior to the proposed Geneva Conference on the topic, they called for the withdrawal of Israel from areas occupied after 1967, and a recognition of the legitimate rights of the Palestinian people. Israel responded angrily, proclaiming that such moves would threaten its national security, and dismissed the key elements of the proposal.

Carter was followed in the White House by former actor, governor of California, and anti-Communist zealot Ronald Reagan. “The specter of a Cold War revival was at the heart of Reagan’s pro-Israel leanings, with the country seen as part of an anti-communist struggle that would keep Soviet influence in the Middle East at bay.”

Subsequent U.S. presidents all supported Israel over the Palestinians, with much of the world community following along. Regardless of Israel’s behaviors, United Nations resolutions and international law, this hasn’t changed.

The author analyzes and clearly discusses the motivations of the key players, both those that were often in the public eye, and the many behind-the-scenes players that have worked so hard to thwart Palestinian statehood. For example, when the U.S. stepped back from peace initiatives during the mid-1980s, it was National Security Advisor Frank Carlucci who articulated the reason: “We’re interested in negotiations that produce outcomes. The U.S. does not need more unrealized expectations or perceived failures in the Middle East.”

While the Camp David Accords resulted in no benefit for the Palestinians, the Oslo Accords were far more damaging. Among other highly detrimental provisions, “the agreement allowed for an Israeli clause that would enable ongoing settlement expansion before permanent status negotiations.” To this day, this is a major point of contention; settlement expansion has been condemned by most of the world community, and is a violation of international law.

Anzika’s in-depth analysis plumbs the depths of discussions and negotiations far beyond what is generally reported. The entire ignoring of the Palestinian people’s rights under international law, including the very basic right of self-determination, has been characteristic of the attitudes of the key players in the conflict for decades.

Preventing Palestine: A Political History from Camp David to Oslo should be required reading for anyone interested in understanding the shocking manner in which the rights of the Palestinians, along with international law, have been violated for decades, all with U.S. complicity. The facts are clearly articulated in this important book.