We Speak for Ourselves: A Word from Forgotten Black America 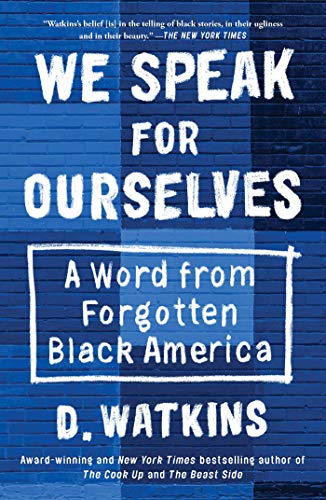 The rise of Barack Obama to the office of the presidency in 2008 heralded, to the talking heads whose pronouncements much of the populace uses to form its opinions, the final indication that racism in the United States was a thing of the past. The unspeakable bigotry of slavery, lynchings, Jim Crow and all the aspects of violent segregation, we were told, had been overcome. D. Watkins’ new book, We Speak for Ourselves: A Word from Forgotten Black America, explodes that myth with the emotional force of a nuclear bomb.

Having grown up in Baltimore, where he lives to this day, Watkins knows institutionalized racism first hand. Throughout the book, he relates the stories of friends, young men with unlimited potential, who were caught in the vortex of drugs and violence, suffering under the brutal cult of the police, and either dying by violence, or being incarcerated for decades for minor drug infractions, victims of the U.S.’s racist “war on drugs.”

A major theme in the book is the disconnect between wealthy blacks who comment on violence against their brothers and sisters in urban areas such as Baltimore, and the very people for whom they purport to speak.

Watkins relates the following incident: “When a smug college professor appeared with me on an Al Jazeera TV show and foolishly said, “The problem is that kids in inner cities like Baltimore don’t want factory jobs, they want to make hundreds of thousands of dollars a month selling drugs,’ I almost died laughing. I asked him, ‘Who makes $100,000 off of crack nowadays? And where are the factory jobs in Baltimore? This isn’t 1960!’ This is just another example of a guy who gets to comment on a world he doesn’t live in, have a connection to, or understand.”

Throughout the book, the racism and brutality of the police is shown to be an integral part of everyday life for blacks in Baltimore; anecdotal evidence certainly indicates that this is not unique to that city, as Watkins talks of the many, many black men and women who have been gunned down across the country by the police, with nearly complete impunity. Baltimore is a city plagued by poverty.

The cruelty with which so many police officers treat poor black men and women is beyond shocking, yet the nation reveres the men in blue as heroes. “Yes, cops take money from drug dealers. Cops rape. Cops lie in their reports. Cops beat people. Cops sell drugs. Cops threaten citizens. Cops intimidate other cops. Cops are gang-affiliated. They’ll snatch a blunt out of your hand and smoke it, hide extra guns in the dope house, aim their pistol at you for fun, plant drugs on you, make you sell drugs for them or with them, make you rob and steal . . .”

As Watkins gained success as a writer, he remained close to his Baltimore neighborhood, realizing that to affect change in the neighborhood, he had to know the neighborhood. He discusses the weekend activists, the people who participate in protest marches after some appalling murder of an unarmed black man, and then return home feeling they have done something. And while he appreciates any efforts on behalf of any oppressed people, marches are not enough. Nor are the writing of checks or letters, petitions, or even voting.

Mentoring is one action he suggests. “It doesn’t matter what you look like or where you come from, everyone can share a skill.” “I didn’t know any writers or professors when I was growing up, so now I’m in my neighborhood teaching writing.” That is what will help.

Commenting further on this, and the disconnect mentioned earlier, Watkins says this: “I think about that lack of exposure and opportunity when I see the outrage from communities, liberals, and the media after a police murder. Sympathizers are quick to slap a victim’s name on a timeline or T-shirt. But the question remains, how are these people really helping the situation? What skills did Freddie Gray have? What was he exposed to?”

Is racism over in the U.S.? Watkins cites a 35-year study that showed “that whites with jail records and higher reported drug use still had more opportunities than squeaky-clean African Americans who had attended college.”

We need to be aware of the suffering and lack of opportunity that leaves so many people behind in a situation they don’t want but can’t change.

While this reviewer recognized that he never knew the black experience—as a Caucasian it is simply impossible—the extent of the racism, institutionalized oppression, legal murder, and complete disregard for those who are only guilty of being black in America is still enlightening.

We Speak for Ourselves: A Word from Forgotten Black America should be read by every individual who believes in equality, recognizes even to a small degree that it is a distant and seemingly unattainable dream for millions of people in the so-called Land of Opportunity, and who truly wants to do something to change it, and provide a chance for even one person who currently suffers under the cruel, racist hand of U.S. governance. The book is clearly and engagingly written and should be in every home in the United States.