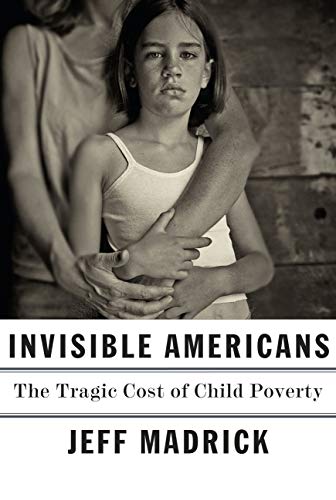 “With the ever-increasing numbers of poor adults and children in the United States, and current government efforts to further decrease benefits for them, this is an extremely timely book.”

In the self-proclaimed Land of Opportunity, millions of people, including millions of children, are left behind. In Invisible Americans: The Tragic Cost of Child Poverty, Jeff Madrick makes that abundantly clear, while also detailing the human and economic cost of such poverty.

The book includes an in-depth discussion of U.S. attitudes toward poverty, tracing them from the 1890s to the present day. Madrick writes: “By the 1950s, most Americans, however, had risen out of poverty, and many of those who did so seemed to assume that anyone able and willing could do so as well.” Yet that myth was shattered with the 1962 publication of The Other America: Poverty in the U.S. by Michael Harrington. That book suggested that fully 25% of people in the U.S. lived in poverty.

Statistics on poverty in the U.S. are difficult to fully document, partly because the official U.S. poverty line is so low. As Madrick reveals: “America chose to adopt an absolute poverty line as its official measure of poverty in 1969. . . .” The author of that official measure “did not believe the new measure, a line beneath which a family could not subsist, was an adequate measure of the poor in America, but its simplicity appealed to lawmakers—and because it was low, it held down federal costs.” In 2019, the U.S. poverty line, as described above, was $25,750.00 for a family of four. Madrick clearly states how inadequate and unfair this number is.

The role of racism in governmental efforts to fight poverty is also described. At a time when demands for curtailing welfare benefits was high, a survey asked: “What percentage of all the poor people in the country would you say are black?” The median response was 50%, at a time when the actual number was about half that.

This attitude was, perhaps, typified by Ronald Reagan, whose “welfare queen” anecdotes became legendary during his presidential campaigns. Madrick discusses one of Reagan’s oft-used stories about a black woman who, Reagan stated, had 80 names and 30 addresses, and had collected over $150,000 in tax-free welfare income. While the woman existed, and was misusing the system, she had four names and made only $8,000.00 in welfare benefits. But the myth of the (usually black) welfare queen persists to this day.

Interspersed with eye-opening facts about U.S. attitudes toward poverty—attitudes of both common citizens and government officials—Madrick discloses the tragic consequences to the children who live in what is referred to as “poverty” and “deep poverty.” Their self-esteem and academic scores along with their rate of high-school completion are far lower than that of their more prosperous peers. And the consequences don’t end after childhood. “At age fifty, people who spent some time in poverty as young children were significantly more likely to have high blood pressure, asthma, and diabetes than children who grew up in families with incomes more than twice the poverty line. They were 71% more likely to have a stroke or heart attack.”

The many programs in the U.S. that are considered part of the “safety net,” including SNAP (Supplemental Nutrition Assistance Program), TANF (Temporary Assistance for Needy Families), AFDC (Aid to Families with Dependent Children), and EITC (Earned Income Tax Credit) are all discussed in this informative book. Their origins, purposes, and how most have been decreased by government decree over the years are all detailed.

What is the problem? What do poor people need? Madrick argues that increasing educational and employment opportunities is not the answer, although both are desperately needed. What poor people most lack is money, and providing a guaranteed income will lift millions of people of out poverty, and go a long way toward mitigating many of its life-long impacts. Said he: “I believe we should provide monthly, substantial, and unconditional cash allowances for all children through disbursements to their families.”

This plan is consistently opposed due to widely held beliefs that the parents who receive such monies will use it on themselves. Yet there is little evidence to support this. The author notes “the success of unconditional cash programs without strings attached in Europe and Canada, which shows us that the large majority of parents care about their children and typically do not squander the money on themselves.”

With the ever-increasing numbers of poor adults and children in the United States, and current government efforts to further decrease benefits for them, this is an extremely timely book. It is well-written and includes a wealth of information to help inform the reader about the critical situation of poverty in the U.S. Information contained in it can be used to question political candidates about their plans to alleviate poverty in the U.S.

Invisible Americans: The Tragic Cost of Child Poverty should be available in all schools in the U.S., and should be required reading for all government policymakers.