Healing Politics: A Doctor’s Journey into the Heart of Our Political Epidemic 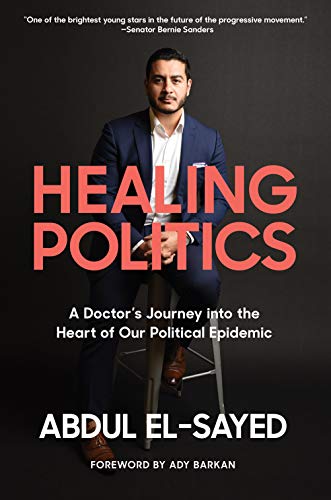 “Healing Politics is a book for today, a roadmap for moving the United States out of its male, white-privileged status to one where there is, in fact and not just theory, equal opportunity for all. This may be a distant goal, but Abdul El-Sayed, in Healing Politics, clearly shows us how to get there.”

Despite the failure of Vermont Senator Bernie Sanders to win the Democratic presidential nomination, the Democratic Socialist movement is alive and well and growing. Nowhere is this more evident than in the words and actions of up-and-coming young Democrats. In Healing Politics, Abdul El-Sayed, one of those very promising people, clearly demonstrates this.

In this book, El-Sayed highlights the critical issues that face the United States, articulates how they most impact poor people and people of color, and then with laser clarity explains the causes and the solutions. An entire section of the book discusses what he calls the “Insecurity Epidemic,” consisting of insecure health, households, communities, places, economy and politics. The author gives the psychological definition of insecurity (“a subjective feeling of inadequacy or lack of confidence”), and then places the term in a sociopolitical frame: “The politically virulent strain of insecurity to which I refer here is, in short, fear for ours and our loved ones futures.”

The book is replete with examples of people who have been, and continue to be, victimized by “the system.” Two examples, among many, are instructive. El-Sayed talked about a time he had to go to court following his arrest at a union protest. Said he: “I watched an elderly gentleman get fined and sentenced to one hundred hours of community service for driving dirty (without proper insurance). If he couldn’t afford the insurance, it’s only logical that he probably couldn’t afford the fine. Worse, the community service requires that he have transportation—the lack of which wound him up here in the first place. Poverty had set its trap, potentially leaving him mired in the legal system for years.”

Another victim is Keisha. “Keisha was one of the top graduates from her high school in Flint, but she had to drop out (of college) because the job at McDonald’s that pays her bills won’t give her regular hours. Unable to afford auto insurance, she has to take the bus, tacking an extra hour to and from work onto her already precarious work schedule. She’s taking online classes but doesn’t know if she’ll ever get her degree.”

There are countless similar examples of people, always poor and usually brown or black, victimized by a system that any free and independent democracy is charged with protecting. In the so-called free and independent democracy of the United States, it consistently fails to do so. And that failure is not accidental, as such things as voter suppression, crippling student debt, and racist drug policies, all discussed in this book, make clear.

But the book is not simply a chronicle of the many wrongs committed by the haves against the have nots, despite the many glaring examples of this. It is a blueprint for a better future, with practical, workable proposals that are constantly thwarted, not because they are not feasible, but because they threaten the influence of the wealthy power brokers now in charge.

Section Three lays out those solutions carefully and clearly, starting with a renewed sense of empathy as foundational. The author discusses three categories of empathy: “Cognitive empathy is the ability to understand, intellectually, how someone in a particular situation might be thinking. Emotional empathy is the ability to share feelings with the other person in that situation. Compassionate empathy is the ability to take those thoughts and feelings and turn them into action.” He gives a practical example of this, too, relaying a time when he watched an emergency room doctor treating a man in horrific pain due to a gunshot wound. She paused and said: “Sir, I know this really hurts you. And we don’t want to hurt you. I’m sorry you have to go through this. But if we can’t treat you, you could die. I need you to work with me. We’re going to get you something for the pain right now. But we don’t have much time, so I need you to let us help you. If something hurts too much, I want you to say, ‘Break, please.’ And we’ll give you a break, okay?” Before long, the man was carted off to surgery to remove the slug lodged in his leg.”

The author closes with “Thirteen Ideals to Heal Our Insecurity.” These are clearly and eloquently stated, briefly summarizing issues discussed earlier in the book, and then mapping out reasonable workable solutions to each. Every solution individually, and all of them together, will end the insecurity that plagues such a large segment of the population. The solutions include Medicaid for All, the Green New Deal, equal educational and employment opportunities, election reform, and many others.

Rarely is so much information included in such an easy-to-read book. Rarer still is finding inspiration and motivation to work against the formidable odds that the status quo in the U.S. presents.

Healing Politics is a book for today, a roadmap for moving the United States out of its male, white-privileged status to one where there is, in fact and not just in theory, equal opportunity for all. This may be a distant goal, but Abdul El-Sayed, in Healing Politics, clearly shows us how to get there.