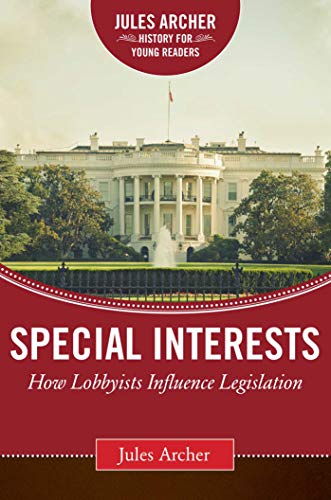 In today’s sordid world of politics, the backroom deals have been moved out into the open, where lobbyists ply their trade, taking elected officials on luxury trips, providing gifts and, most importantly to the officials, funnelling donations generously to their election and re-election campaigns. Many lobby groups are indiscriminate, donating to both major parties and opposing candidates, knowing that whichever candidate is victorious he or she will be indebted to the lobbyist, and the special interest that that lobby represents.

In Special Interests: How Lobbyists Influence Legislation author Jules Archer traces the history of this practice back to the early days of the United States. The special interest groups are the only things that have changed from railroads and the copper industry of yesterday, to guns, tobacco and insurance, among others, today.

But what has remained the same is the fact that officials govern, not in the best interests of the people they represent, but as directed by these lobbies and the groups they represent. Over the years, Congress has voted to reduce water and air quality standards, allow guns to be available almost anywhere to almost anyone, and to grant foreign powers an unprecedented voice in U.S. governance.

The corruption inherent in this is beyond amazing. “During the Eisenhower administration, an investigation revealed that five of the seven commissioners on the Federal Communications Commission (FCC) allowed lobbyists for the industries they regulated to pay their travel, restaurant, entertainment and vacation expenses.” One wonders how much genuine oversight the commission would have over industries treating its members so generously.

That “representatives” dance to the lobbyists’ tune cannot be denied. As Archer reports: “Clients of mining lobbies, who have won permission to operate in environmentally sensitive areas, have left behind 70 billion tons of poisonous tailing that contaminated land and threatened the health of nearby homeowners. Have left behind half a million dangerous open pits and mine shafts, and the pollution of some 12,000 miles (19,000 kilometers) of waterway.”

This is not simply a problem on the Federal level; in 1983, California Secretary of State March Fong Fu commented on “unbelievable spending that is turning elections into auctions.”

In summing up the issue, a writer for the British Economist said this: “Washington’s culture of influence-for-hire is uniquely open to all buyers, foreign and domestic. . . . Its lawful way of corrupting public policy is unrivaled.”

What is to be done? Archer outlines several constructive ideas, but offers the caveat that they will be difficult to implement; the powers that be will not bite the hands that so generously feed them.

Although the book only includes information up to the Clinton era, thus not discussing Citizens United or other more recent abuses of the public trust, it provides an excellent overview of lobbying, its history, and the problems it causes to the average citizen. To understand how the U.S. government operates, Special Interests: How Lobbyists Influence Legislation is a vitally important book.